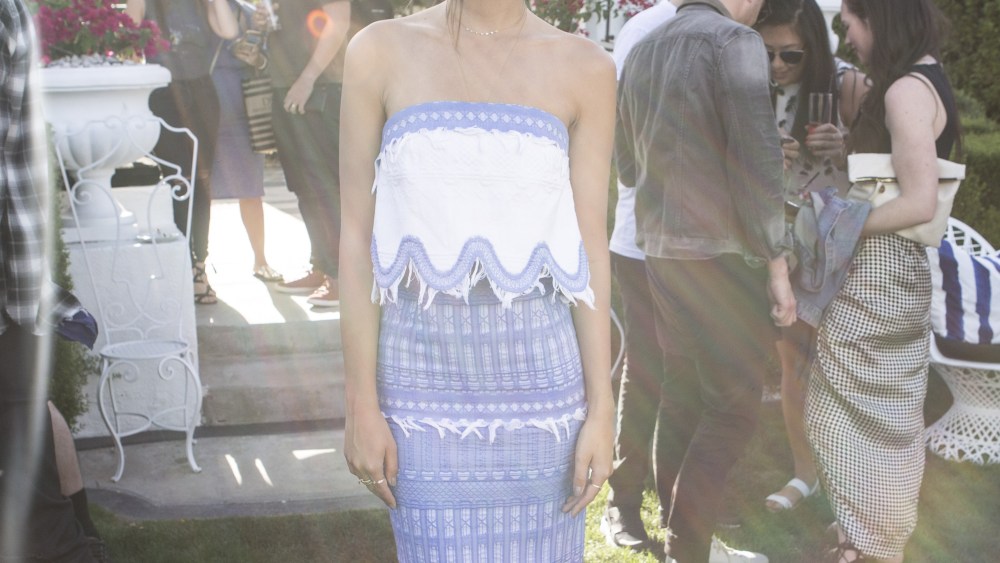 The saying goes, “If it ain’t broke, don’t fix it.” That adage could be applied to most of Coachella’s most popular parties, including Nylon’s Midnight Garden Party, Neon Carnival, Jeremy Scott’s late-night bash, and PopSugar’s welcome cocktails and Council of Fashion Designers of America brunch. The latter two events, which took place Friday evening and Saturday mid-morning at the popular Avalon hotel in Palm Springs, made it easy for invited guests, several of whom were staying on the property, to walk just a few steps to the fashionable affairs.

It was probably a good thing, as actresses like Kiernan Shipka arrived in Palm Springs with plenty of luggage. “The plan of attack this weekend is to have a bunch of fun with [fashion]. I’m totally embracing the desert vibes and trying to go for it 100 percent,” said the young actress, who was clad in a Dior dress over shorts on Friday and a Valentino two-piece denim outfit on Saturday. “It worked out this season that a lot of stuff was Coachella-y, and I did a lot of vintage shopping, which was awesome.” (For the first night of the festival, she donned a vintage floral jumpsuit.)

Five-time festival attendee Ashley Greene, who wore a Parker two-piece set to the CFDA brunch, said she’s made it a habit to overpack to act as a stylist for her BFFs. “I always bring so much stuff and my boyfriend is literally like, ‘What’s your problem? Like, we’re there for three days.’ But we have a house with nine rooms and his sister is with us and two of my best friends are with me so I always bring stuff for all the other women in the house. There is a master closet with all the clothes and all the girls go in there every day and pick out outfits.”

Jonathan Simkhai, who repped the CFDA for Saturday’s poolside brunch and also dressed Emily Ratajkowski to host Friday’s party, summed up what most guests were feeling: “I think people come here and let go of everything. You just come to the desert and wear outfits that you wouldn’t normally wear and act free-spirited. I see people getting excited with the buildup and shopping for Coachella, and watching retailers doing their marketing initiatives and dressing people, and it’s actually helping the retail industry.” From a fashion designer’s perspective, he said, “All those trends that you are seeing at Coachella, from the lace-up tops to denim cutoffs, also symbolize what we are moving away from.”