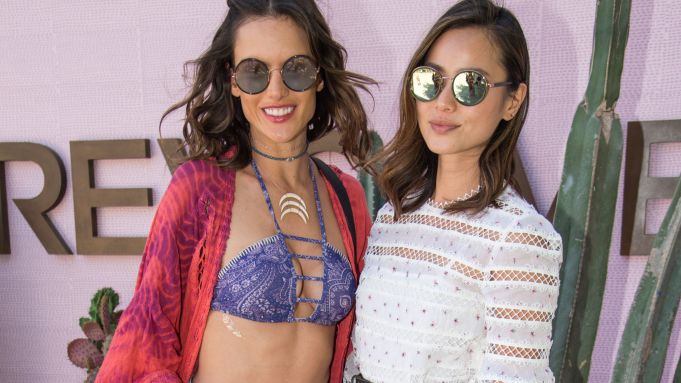 Despite a raging late-night party scene during the Coachella Valley Music and Arts Festival, not everyone pulled all-nighters. “LCD Soundsystem was awesome [and then] I went to bed. I’m a mom,” said former wild child Bijou Phillips, one of the few who looked fresh-faced at Revolve Clothing’s Desert House in Indio, Calif., on Saturday afternoon. Phillips, who has “been coming since I think the first Coachella,” noted, “Every year, there’s some new [trend] thing. Outside braids, I see those a lot, and almost half the girls are in these super short shorts with crop tops.”

Case in point: Alessandra Ambrosio, in a bikini top from her own line and denim shorts from Re/Done, cofounded by her fiance Jamie Mazur. “I’m always showing my skin,” said the Brazilian model, who adorned her scantily clad guests with her new line of metallic, hand-drawn body art, Ale by Alessandra. “I always loved body art and tattoos,” said the 12-time festival attendee of launching her line timed to spring festival season. Ambrosio is no stranger to tattoo regret. “I have one that I did when I was 18 that didn’t come out right,“ she lamented. “These are no-pain and if you change your mind, it comes off.”

Jamie Chung, who shopped the Revolve racks at the private estate, donned considerably more clothing in a perforated Zimmermann frock for her girls’ weekend. “It’s my sister’s  and my sister-in-law’s first time here. It’s kind of cool to see it through their eyes,” said the nine-time fest attendee, who noted that husband Bryan Greenberg is shooting in New York. “I f–king love this place. Excuse my language, but it’s such a great place to catch up with friends,” said Chung, who’s about to film a “super small role” in “Office Christmas Party” with Jason Bateman and Jennifer Aniston.

The event — hosted by a tardy A$AP Rocky, along with A$AP Ferg, A$AP Bari, Cozy Boys and Lolawolf, fronted by Zoë Kravitz — wrapped with plenty of time to catch Saturday night’s headlining act at the nearby Empire Polo Club.

Phillips said the secret to Coachella survival was plenty of sleep. “I met a good guy,” she said of husband Danny Masterson. “My good guy is at the hotel sleeping still. He’s power napping for Guns N’ Roses.”