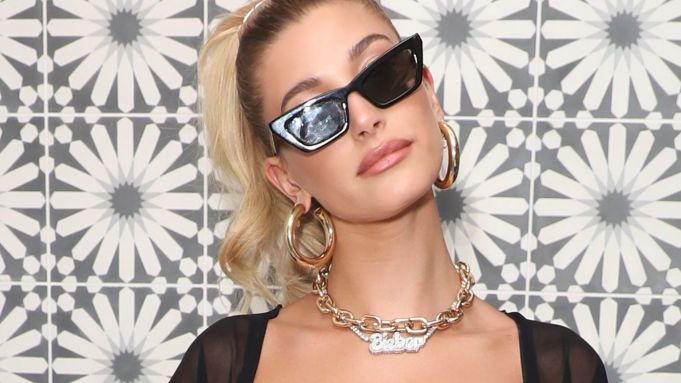 Levi’s had Snoop Dogg DJing and shooting Snoop dollars and blunts into the swimming pool. Adidas held its SportsClub at an estate with its own helipad, beach and lake-sized swimming pool. And Moschino and “The Sims” had a roller-skating rink, fun slide and mini concerts by Diplo and more at the home that Tentology, the world’s leading manufacturer of luxury commercial tents, built.

There is the official Coachella festival, and then there is the shadow festival, the one that happens at the brand-sponsored parties hosted in the dusty, desert environs of Indio, where over the weekend Leonardo DiCaprio, Hailey Bieber, Emily Ratajkowski, Kendall and Kylie Jenner, Gigi Hadid, Donald Glover, Idris Elba, Jaden Smith and many more flocked to drink, dance and hashtag, wearing Levi’s, Moschino, Gucci, Ganni, Off-White, Versace prints-on-prints, YSL heart sunglasses, cowboy boots, bucket hats, matching Aloha print shirt and shorts sets (exhibit A: Darren Criss), bum-baring thongs and crystal-fringe skirts. Photo ops were everywhere, from the Dosist party at Two Bunch Palms, where guests could toke up and tune out in an underwater Sound Bath, to YSL Beauté’s pop-up in a gas station in Cathedral City.

A rundown of what happened where:

Levi’s in the Desert Pool Party

The denim giant staged its annual brunch around the pool at the Sands Hotel, with tunes by St. Vicous (St. Vincent’s DJ alter-ego), and Snoop, who was joined at laptop by Wiz Khalifa, and who encouraged everyone to chill in the pool (model Candice Huffine obliged, jumping in wearing her Levi’s cutoffs and T-shirt.

The event was a coming out party for Bieber, who was named the first face of 501 Jeans last week. She stuck close by her stylist Maeve Reilly in a cabana in the shady VIP area. “It’s my favorite festival,” Bieber told WWD of her love of Coachella.

“I like the ability to move languidly between people playing beautiful music,” said actress Amandla Stenberg, who was wearing a Levi’s Made and Crafted denim bustier and wide-leg jeans. “It’s definitely chaotic, but it makes the way you engage with the music even more fun.” Among her festival highlights this year? “Janelle Monáe was so good. Woo, she is so special. And that performance was flawless.”

Luka Sabbat was rocking a pair of 501s he customized, based on a doodle he made in the car on a road trip to shoot an ad campaign, with a serious diamond-encrusted Patek Philippe watch. “This is my trip,” he said, showing the elaborately embroidered jeans, resembling a road map. “They say ‘Idyllwild” and “Route 146,’” said the fashion fan, whose hotel room was filled with custom cowboy boots, diamonds by Ice Box and more. “I love custom, because then I can be like, ‘You don’t have these.’”

Sabbat is also a Coachella regular, and he’s had some wild trips at the festival, too. “It was the classic worst-case scenario, having my phone die then losing my phone and my friend group. Being by myself in the desert, I had no idea where the driver is, I was by myself with a ton of jewelry on,” he said. “I was basically hitchhiking but made it look glam, asking any person if they could take me home.”

Over at Rachel Zoe’s Zoeasis, the mood was more dressed-up. Kiernan Shipka and the rest of the guests were party-pretty in frilly dresses and fringe jackets, sipping frose and nibbling on charcuterie platters, in between touch-ups at the Sephora beauty lounge, and customizing sunglasses and jewelry as part of activations with the brand Kendra Scott and the upcoming Elton John film “Rocketman.”

“This is my fourth Coachella,” said Shipka, who stars in the show “Chilling Adventures of Sabrina.” “The first year I was in a hotel with five other people.” Did anyone get arrested? “No, no one got arrested, I’ve always had pretty chill Coachella experiences,” she said, sharing her favorite memory: “I went onstage with Lorde last year. She’s a friend of mine and graciously let my friends and I go up onto the stage with her.”

Zoe was dressed in a sequined floral dress from her collection. “We started this because, I’m not 25, I’m 30-ish,” she joked. “And we wanted to create something on-brand that I would want to go to, that my friends would want to go to, that wasn’t already there. We wanted it to be a calm before the storm apart from the festival. We don’t expect people to be dancing on the tables. We want this to feel like an escape in the desert.”

While she admits people probably don’t think of her as a Coachella-goer (and truthfully, she is not) she is a classic rock fan and did have her time as a teenage Deadhead. “For our brand, this really resonates with partners and sponsors. Every year, there is more interest,” she said. (Swatch, Zappos and Sun Seeker wines were also event partners.)

While influencers Victoria Justice, Alisha Boe and Paris Berelc hash-tagged away, others were more guarded about the festival scene, one of them being Erica Pelosini, who was also hitting the Revolve events. “It’s been six years I have been going, I was very excited in the beginning, now a little bit less,” she said. “But it’s still fun, we are in a beautiful place with fun people.”

Moschino Desert Party With The Sims

“I had a quiet day at home,” said Jeremy Scott, who owns the famed Elrod house in Palm Springs, where he spent his Saturday, before bounding into the VIP area at his party just before midnight. “This is definitely a little bigger,” he said, surveying the scene of his annual post-Coachella bash, including a roller-skating rink, carnival fun slide, Sonic food truck and built-out concert stage for headliners Diplo and Saweetie, complete with a screen streaming Moschino and “The Sims” imagery.

The designer revealed a collaboration with the classic video game “The Sims” last week, and revealed at the party that there will also be an in-game component, where players will be able to rock virtual Moschino looks. “It fits with my philosophy of wanting to bring my designs everywhere. That’s why I do baby strollers and collections at Sephora, having clothes in this game is in line with everything I love,” he said, noting that “The Sims” life-simulation games are also in line with how people live their lives in a virtual world, on their phones. “It’s the present,” he said of the alternate reality, which for the first time will have an option to be Moschino-clothed.

There was more big news for Scott at the event: a second Sephora collection, which Moschino T-shirt-clad models were showing off. Packaged in briefcases, the collection, which will launch April 25, is inspired by office supplies, complete with highlighter pen eye shadows “for boss ladies,” Scott said.

“Yo, Tay. Hey, you got sunscreen or do your cousins have sunscreen? I’m, like, dying for sunscreen. It is so hot out here. All I had was SPF 20. I’m a roast chicken right now.”

Eddie Huang, the celebrity restaurateur and owner of BaoHaus, lathered himself up with some SPF 50 that materialized, following a barbecue he hosted with football player Von Miller and Pusha T for Adidas at the Zenyara Estate in Coachella.

“It’s fun to introduce people in a big setting like this to different types of food. We’re saying it’s jerk chicken, but there’s a lot of Asian finesse to what I do. It’s Chinese Jamaican and I’ve been eating that food for a long time. Most of my friends are from the Caribbean and we just barbecue at my house. So it’s fun to get to do an event for Adidas, 300 people. Come try this cuisine that I’ve basically been cooking at my crib.”

The barbecue Friday kicked off a three-day party at the Adidas Sport Club, the home of the sportswear firm’s series of events that included a “You Had to Be There” festival, including performances from Diplo and A-Trak, in which fans were asked to put away their phones to actually enjoy the experience (remember those days?). A private party Saturday night with scant details ended up being closed off to press at the last minute and, no sign of Beyoncé, despite the brand’s big announcement just ahead of Coachella’s first weekend.

Just when it seemed Revolve couldn’t top itself, this year it did. The retailer, which once again took over the V Palm Springs and hosted its after-dark parties all weekend, continued on with its #RevolveFestival, which managed to woo celebs such as Oliva Culpo, Winnie Harlow, Shanina Shaik, Elsa Hosk and others to see performances from SZA, Offset, Rae Sremmurd and 2 Chainz among others.

Kendall Jenner arrived in the late afternoon Sunday, posing for photos before heading to the VIP cabanas by the stage with Revolve cofounder and chief executive officer Michael Mente and chief brand officer Raissa Gerona, as they settled in next to Teyana Taylor.

Attendees could shop actual #RevolveFestival merch (a first this year), ride a carousel or chair swing ride or pop in at the tents of brands such as Quay, La Croix and Revolve’s recently launched sister brand Superdown. What garnered the longest line? A floral photo op that saw a continuously long line as festivalgoers stood in the sun to await their turn for the perfect snap.