The arts and music fest is as much the launch of the “festival fashion” season as it is a chance to take in live performances. 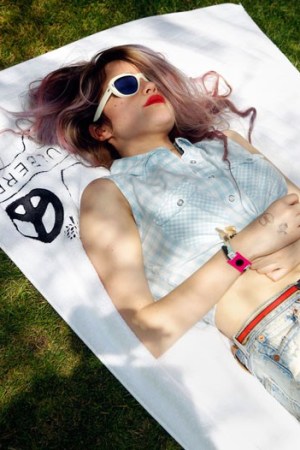 The desert was the place to be last weekend, as 90,000 fans descended onto the fields of the Empire Polo Club in Indio, Calif., for the Coachella Music and Arts Festival, which is now as much the launch of the “festival fashion” season as it is a chance to take in the dozens of live performances. Ultrashort and high-waisted denim shorts, crochet, lace and boots were all de rigueur among the stylish set, as were cross-body bags, fringed hobos, straw hats and aviator shades. (See slideshow.) As always, a privileged handful took part in chic off-site pool parties and raucous late night bashes. On Friday, A|X Armani Exchange hosted a poolside brunch at the Colony Palms Hotel for young actors such as Shiloh Fernandez, Jamie Chung and Ashley Greene.

The next day, Diesel threw a Bloody Mary brunch at a rented estate for those who could make it out of bed before noon. (Several hundreds of revelers had stayed out till the wee hours at an AllSaints-hosted bash for Kings of Leon, who closed the festival on Friday night.) Also on Saturday, Mulberry hosted a noontime poolside barbecue at the Parker Palm Springs, where creative director Emma Hill had set up shop with the fall-winter collection in the famed Gene Autry house (because it makes perfect sense for an English brand to host market appointments in the desert). Parker guests Nicole Richie, Gia Coppola, Nathalie Love, Hilary Tisch, Hedi Gores, Harley Viera-Newton and Sky Ferreira all sported tiny handbags from the collection. Also present were Camilla Belle, Eliza Doolittle and Alexa Chung, who took a quick break from her DJing duties at Phillip Lim’s pool party nearby.

“I definitely am coming to Coachella every year from now on,” said Belle.

Lim’s own shindig, up the mountain off Bob Hope Drive, boasted a bird’s-eye view of Palm Springs along with an infinity pool. The scene was reminiscent of a Slim Aarons tableau, only with slightly grungy types dotting the yard instead of well-groomed socials. Lim for his part floated in the water enjoying the scene.

Back at the polo grounds, where shows started at noon but most fans arrived around 5 p.m., the VIP area was swarming with beautiful women and the men who love them. Isabel Lucas, Alessandra Ambrosio, Beyoncé, Katy Perry and Dita Von Teese were spotted in the crowds that came to take in Arcade Fire, Mumford & Sons, Jenny and Johnny and a slew of other acts. Afterward, those with the energy headed to a nearby airport hangar for 944 and A|X Armani Exchange’s Neon Carnival, which was just that, and included carnival rides and midway games. Rihanna, Usher, Leonardo DiCaprio and Kellan Lutz were among those who partook in the amusement.

By Sunday, guests had the wake-up, lounge-poolside, listen-to-bands and party-into-the-wee-hours routine down pat. Those at Lacoste and HTC’s poolside idyll frolicked one last day before the final night of the festival, where Kanye West closed the show with fireworks — literally — and a set that included a natural anthem for the weekend, his hit “Good Life.”