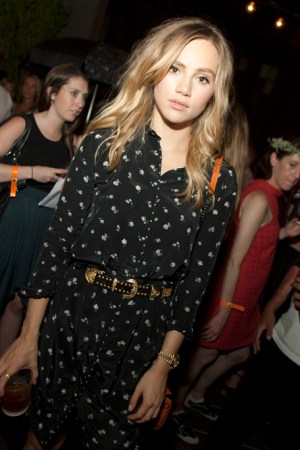 In the early twilight of Tuesday evening, much of the social media coming out of the Tristate area was of one thing: the sunset. An angry summer storm had just blown through Manhattan and in its aftermath, a particularly picturesque (read: particularly Instagrammable) sky — a gash of orange against watercolored pinks and blues — was revealed. People couldn’t help themselves.

Even Chloë Grace Moretz wasn’t immune to its colorful draw. Luckily the teen actress was in prime position: a particularly scenic tract of the High Line where Coach was holding its annual summer party. After much scouting, she found the perfect spot, handed her brother her festive flower crown — lest it get in the way — and snapped away. Directly above her on the right was another Kodak moment in its own right: a massive billboard featuring Moretz’s Coach campaign. “It’s a little weird,” she admitted, gazing up at her larger-than-life image.

Around her, the summer soiree was revving up. It had all the essentials: a flower crown-making station, caricature artists, a photo booth, hotdogs and fries, and, of course, flowing rosé. And then there was the blonde-heavy guest list; Moretz, Kate Bosworth, Kiernan Shipka, Suki Waterhouse, Dylan Penn, Chloe Norgaard and Hailey Clauson among them. “We’re homies,” Moretz said upon spotting Coach’s creative director, Stuart Vevers.

No kidding — Waterhouse had flown in from London just for the occasion; a first stop on her string of global lily-padding. “I’m going to Mexico for work and then to Glastonbury,” she said. Looking forward to any acts in particular? “Kanye,” she said immediately. “It’s going to be amazing.” A Yeezus viewing was just the first of the model’s extensive summer plans, though. “I’m going to Burning Man for a week,” she said. “My friends are doing a skydiving camp, so we’re going to fly in a helicopter over Burning Man and jump out, and then just do that a few times.” OK then.

For the less adventurous, a street-bound pilgrimage of sorts took place towards the end of the evening with a winnowed down group, including Moretz and Bosworth, heading two blocks south to Santina for an intimate dinner-after party. By then, the sunset was long gone, but there was still plenty of rosé to go around.