The shoe brand invited the cool kids to dinner at Il Buco on Monday. 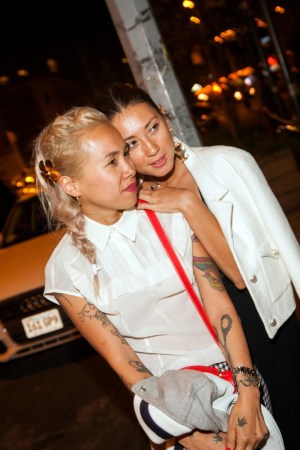 All the cool kids were wearing Cole Haan shoes Monday night — or at least three quarters of the guests were who showed up to toast Jen Brill and Opening Ceremony’s Olivia Kim’s capsule collection for the footwear company. A dinner honoring Brill and Kim’s youthful, edgier reinterpretation of Cole Haan’s Chelsea Pump (in the form of a color block, peep-toe sandal, a strappy style, and a lace-up bootie) was held at East Village eatery Il Buco to coincide with the shoes hitting the brand’s SoHo boutique and Opening Ceremony the same day.

Chloë Sevigny, Chrissie Miller, Charlotte Ronson, Annabelle Dexter-Jones, Theo Wenner, Nate Lowman and Liz Goldwyn were among the guests at the dinner. A few stragglers showed up post-Marc Jacobs’ show just as cocktail hour wrapped up and dinner was about to begin — including Leigh Lezark in a burgundy pair of the lace-up booties.

“Do you want the long story or the short story of how this came about?” Brill asked as she greeted Lezark. Kim, who was clad head-to-toe in Chloë Sevigny for Opening Ceremony, interjected: “Well, here is the short story — we were obsessed with these old fisherman sandals that Cole Haan did in the Eighties. We have a mutual friend [at Cole Haan] and we just said, ‘We should do something.’”

The friends and codesigners were in unison about two things: They don’t wear flats and they wanted to create shoes that felt modern but were easy to walk in. “We get dressed early, and then we often have something later on, so we need shoes that can take us from morning to night,” Brill said.