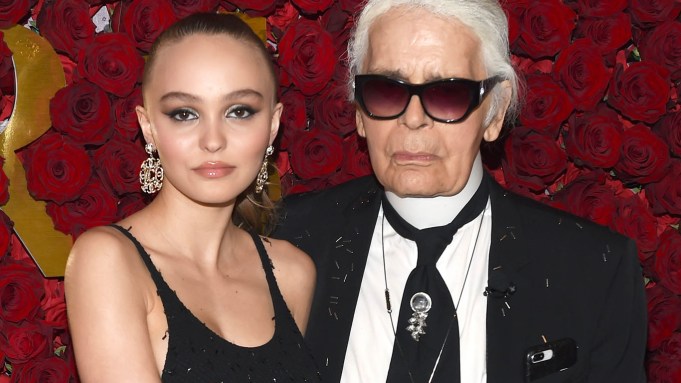 On Tuesday evening at the Pierre hotel in New York, admirers, colleagues and friends alike gathered in the ballroom to celebrate Karl Lagerfeld’s reception of the John B. Fairchild Honor at the WWD Honors event. Lily-Rose Depp, Vera Wang, Anna Sui, Hari Nef and more walked the carpet ahead of the evening’s festivities.

Like many, Wang clearly recalls her first time meeting Lagerfeld.

“He had just finished Chloé,” she said during the cocktail hour. “I used to be the European editor for American Vogue, so I remember meeting Karl when he was doing Fendi.”

It was then that Lagerfeld gave her what remains her favorite “ism” of his.

“He gave me a very famous quote that I say to all my design assistants: ‘a miniskirt is but a maxi belt,’” Wang said. “Quote unquote Karl Lagerfeld. How’s that?”

Depp, for her part, has been a Chanel girl since before she could even dress herself.

“My first memory of wearing Chanel was probably when I was still in diapers, going into my mom’s closet and picking out her Chanel heels and her dresses and stuff, even though I was swimming in them,” she said.

“I would put on all her Chanel stuff and carry around her bags and everything, so it was probably my first dress up memory as well,” continued Depp, whose mother is model Vanessa Paradis and father is actor Johnny Depp. “I’ve known [Karl] since I was eight — he’s definitely somebody who has been in my life since I was little. I definitely have a lot of Chanel memories growing up.”

The earliest Chanel memory was, naturally, at the Paris atelier.

“I was at the atelier with my mom — she was having a fitting or something — and she went up to say hi and I was with her,” she said, before adding praise for the designer.

“I’m always blown away by all of it. Especially haute couture — I’m always just so amazed by it and the gowns are always incredible,” she said. “But all of it is a different aspect of the look. I love a bag, I love jewelry. Chanel clothing and haute couture can never let you down.”

And Lagerfeld? “The amount of stuff that he comes up with…the amount of creativity in his head, that he creates each year and has created over his entire life, the different ideas he has had,” she said of what makes him an inspiration. “He’s really somebody who has managed to evolve but never stray from this level of artistry and precision. But at the same time, he’s never done the same thing twice.”

“I remember my mother was a Gucci girl during the Tom Ford era,” said Nef, who just celebrated her 25th birthday with a party at the Campbell Apartment at Grand Central Terminal this past weekend. “I remember her Gucci fragrances in addition to she had some killer Gucci heels, and I feel like she must’ve had a silk leopard print shirt maybe. She actually ran a designer consignment eBay shop for a time so a lot of her old designer stuff she sold. When I was a teenager I had all this archive Prada and Chanel in our basement. It wasn’t ours, but she was selling it on behalf of some very wealthy local ladies.”