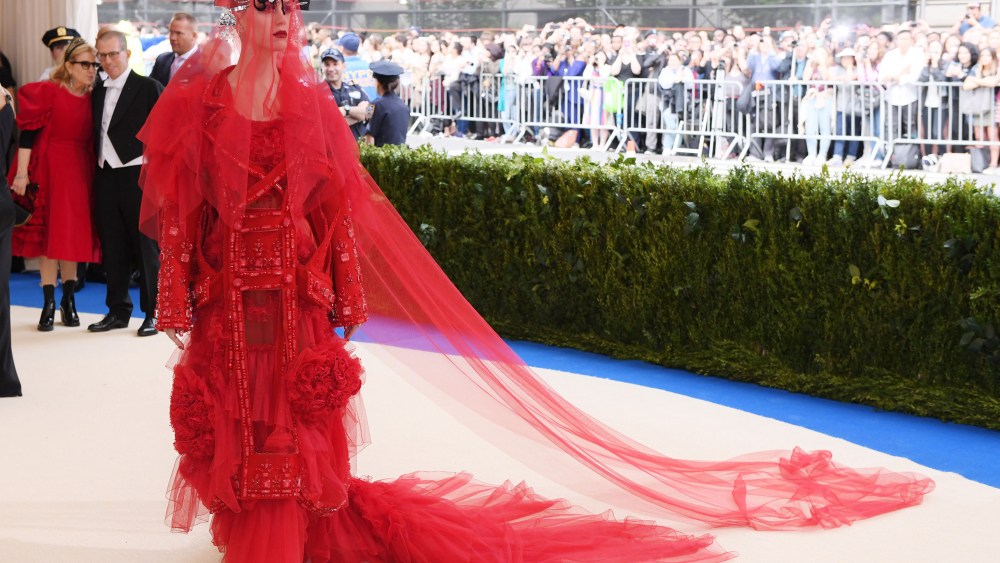 Just how many celebrities have the guts to wear Comme des Garçons on the red carpet? As the night started on the steps of the Metropolitan Museum of Art on Monday night, for the 2017 Met Gala, themed “Rei Kawabubo/Comme des Garçons: Art of the In-Between,” the answer was: Very few. Cohosts Katy Perry and Gisele Bündchen opted for the likes of a different design (cherry red Maison Margiela for Perry, slinky cutout sustainable Stella McCartney for Bündchen); Anna Wintour was, naturally, in Chanel but cohosts Pharrell Williams and wife Helen Lasichanh both turned out in their Comme finest.

“It’s, like, you know, rocker-hillbilly-meets-everything Comme,” said Williams of his look. How long did it take the pair to get ready for the evening? “Not too long, surprisingly. [Helen] just had to get in it, zip it up and like stand in that dress,” he said. “It’s pretty easy for me, but I’m a man so it’s different.”

“It took like half an hour to get ready. We dress like this on the weekly,” Sean Combs called out as he trailed behind the long dramatic train of girlfriend Cassie Ventura’s gown. “This is just Monday night,” Ventura added.

Laura Dern, hot off her “Big Little Lies” success and on the verge of the “Twin Peaks” remake, arrived with (and in) Gabriela Hearst; they got dressed in “five minutes” each.

Cynthia Erivo’s most complicated fashion look? “Probably this, because it has a corset on the inside,” she said of her Thom Browne look. “So I would say anything with a corset.”

Met Gala newcomers this year included Lucas Hedges – who paused at the top of the carpet to take an iPhone photo of the scene behind him — as well as Ruth Negga, who was dressed in Valentino Haute Couture. (Pre-party prep time? “A couple of hours,” said Pierpaolo Piccioli.)

Carolina Herrera trailed behind the stars she had dressed for the evening, including Karlie Kloss, Emmy Rossum, and Hailey Baldwin. How had the designer approached her own look for the evening? “Me? Like any other party,” she said. “I dress the stars. That’s it.”

“I own a lot of Comme des Garçons,” said Marc Jacobs, who walked the carpet with Courtney Love, and Frances Bean Cobain. “A couple of years ago, I wore a Comme des Garçons lace dress [to the Met], because I think of Miuccia [Prada] as an alternate thinker — but Rei represents possibility.”

Love claimed to have worn Comme “twice” in her life, but was at a loss for either occasion. “A fashion show I think?” she said. “I can’t remember.”

Mindy Kaling has also slipped into the designer’s creations — though nothing as intricate as the designs on display in “Rei Kawakubo/Comme des Garçons: Art of the In-Between.” “Just in streetwear over jeans. I’ve never worn a dress, because I feel like to have it tailored to be more flattering for me, I might be taking away some of the artistry,” said Kaling, dressed in Prabal Gurung for the evening’s festivities. “I’ve worn accessories, the perfume — which is amazing.”

Surprisingly, it was the stars in Comme des Garçons who seemed to have the easiest time getting up the stairs. Halle Berry, in a Versace sparkler, took the prize for first stumble of the night. Sometimes it pays not to dress sexy.