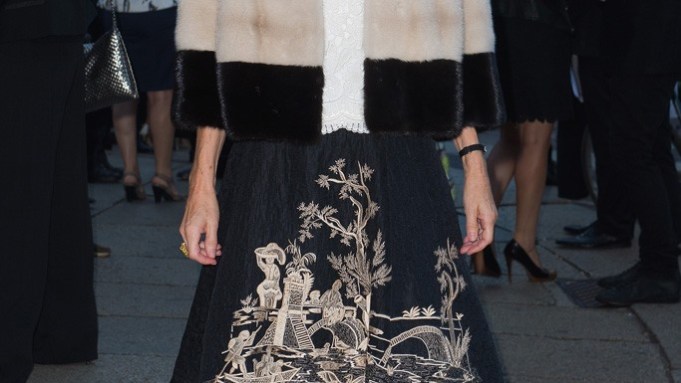 POWER CROWD AT THE OPERA: La Scala has rarely seen a more fashionable— and powerful — audience.

The musical moment punctuated a day when the American publishing company unveiled a new initiative to boost Milan as a fashion capital, teaming with five prestigious Italian universities to present five students with academic scholarships in fashion, film, art and journalism.

“It’s part of our DNA, the relationship with the Italian fashion community,” he said. “The well-being of this community is critical to us. And you know, this is a very difficult time. While five scholarships won’t change the world, they certainly touch the lives of five people in disciplines that are near and dear to us.”

“For me, this scholarship is of inestimable value,” said Diego Salerno, recipient of the Vogue Women’s Fashion scholarship, which will allow him to begin a three-year undergraduate program at the Milanese Istituto Europeo di Design.

“We feel that there is a real sea of change going on in Milan,” she said, praising the leadership of the Camera della Moda — with whom Wintour has clashed openly in recent years, usually over show scheduling. “I think that the Italians are thinking less as individuals and more as a community.…We all have to understand that we all work in the same business and we all need to support each other.”

The GQ Men’s Fashion scholarship went to Alberto Furlan, who will pursue a two-year master course at the IUAV University in Venice, and the Vanity Fair Film scholarship was awarded to Francesco Fanuele, who will study at Rome’s celebrated Centro Sperimentale di Cinema.

“I really believe in Italy,” Labanca said. “It’s my country and it would be incredible to work for a publication here.”

“When I saw those kids up there, I thought: This is a great thing to do. Hopefully we’ll do the same thing in America,” said Vanity Fair editor in chief Graydon Carter. “It’s tough being a kid and trying to make your way in any one of these fields.”

Before the “One Night, One Voice” performance at La Scala, Townsend cohosted a cocktail at the legendary theater with Jonathan Newhouse, chairman and ceo of Condé Nast International. Newhouse was flanked by Wintour and Vogue Italia’s Franca Sozzani, who’s functioning in the role of Milan’s chief cheerleader amid her visiting American cousins.

“Italy is going to improve as it follows the U.S. economy and it’s showing signs of sustained recovery,” Townsend noted at the cocktail. “The German elections are critical, and Italy should play a more significant role in Europe. Change is necessary.”

“When Milan sets its mind on something, it knows how to do it right,” Armani said as he took in the crowded venue: “Such high-profile people, the location, smiles all around —and it managed to get me out of my lair, where I’ll return in an hour.”

“I’m in love with Milan. In daily life, there’s a quality that is unmatched,” enthused Rochas designer Marco Zanini, whose treasured routines include an “aperitivo” at Cucchi around the corner from his apartment.

Up-and-coming talent Fausto Puglisi, a Sicilian who also designs Emanuel Ungaro in Paris, lamented that the Italian fashion capital can be provincial, and is not the easiest place to work. “Now Milan needs people that really love Milan,” he said.

As for past battles with Wintour, Mario Boselli, head of the Italian Chamber of Fashion, suggested a warming trend, noting the association has “changed, but all have taken a step forward in the same direction.”