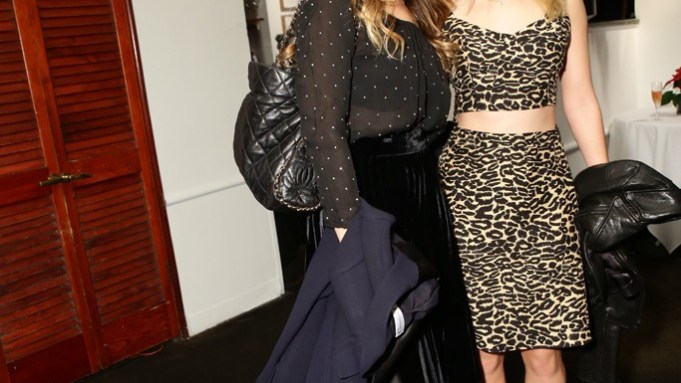 “You’re the only person I know here,” Tamara Mellon told Sarah Jessica Parker. This was a surprising admission for Mellon to make in the foyer of Michael’s, the Manhattan media hot spot that’s usually patronized by many in her social circle. It was especially unexpected to say on this particular Monday, when the restaurant was the jammed site of the Cosmo 100, a lunch Cosmopolitan magazine editor in chief Joanna Coles began last year that’s hoping to join the ranks of must-attend annual lady power luncheons.

It was the first time at the lunch for Mellon, who has recently published a business memoir, “In My Shoes,” about her time leading Jimmy Choo.

“Obviously one of my big causes is women’s empowerment,” she said of her reasons for attending. Parker came last year. It was a different time then — Quinn was still in the middle of her mayoral campaign.

“What happened last year was Joanna sent me an e-mail saying, ‘Come to this intimate lunch,’” Parker said. “I didn’t have a stitch of makeup on and I walked into this room with newly elected politicians and titans of industry and the worlds of publishing and fashion. But I met some people there that I will know for the rest of my life, like Molly Stern and Gillian Flynn.” Stern runs the Hogarth imprint at Crown Books, the publisher of Flynn’s “Gone Girl.”

“It is my mission to never miss this lunch. I hope it becomes a standing date,” Parker said. The actress had made time for the lunch from the play she’s doing off Broadway with Blythe Danner, “The Commons of Pensacola.”

During the lunch, Ferreira, who sported the complete hobo look in a ripped T-shirt and oversize olive parka, listlessly took in remarks by Coles and Shaheen, only occasionally coming to life to move around the pieces of her mostly untouched salad.

When Shaheen remarked on the “incredible” slate of female leaders in the Senate, drawing applause from the crowd, Ferreira stirred up some and mustered enough enthusiasm to clap casually for a few seconds.

Earlier, as the salads, a unique concoction dubbed the “Cosmo Cobb,” were served, Coles led the room in a “Happy Birthday” sing-along to Gillibrand, who was turning 47. “My wish is for equal pay for equal work,” the senator, ever on message, said. She left before the main course was served to presumably attend congressional business. Quinn, who now has a lot more free time on her hands, stayed throughout.