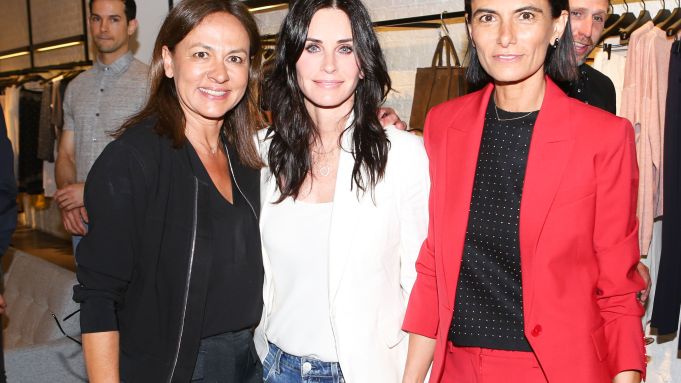 Los Angeles is full of sister acts, and Maryam and Marjan Malakpour are among the most stylish. The stylist sibling and founders of footwear label Newbark toasted their first collaboration with Theory on Thursday night with a party at the brand’s Melrose Avenue flagship.

“We wanted to make a cool gathering for our friends, in our hometown,” said Maryam, clad in a red Theory suit and matching slides from the collection. Indeed, the crowd drew some stars, namely their friend Courteney Cox, plus Rowan Blanchard and Gia Coppola, but there were more hipsters and cool kids crowding the store than anything — though Blanchard and Coppola fit both categories.

In fact, the musical performer, band Cherry Glazerr, was so cool that most hadn’t heard of them before. “We’re Liz Phair, you can look us up on the Internet,” joked lead singer Clementine Creevy. The crowd actually paid attention enough to get all her jokes, including jabs at fellow hipster band Father John Misty.

“They’re very ‘on the talk,'” said Maryam of the cutting-edge entertainment.

After the show, Angela Lindvall, styled by the sisters in a white Theory suit and matching slides, said, “I think we’re going to get dinner at Chateau Marmont. We were also supposed to go to the Vivier party, but it’s getting late.”

The model and wellness coach is busy with several new projects, including working with indigenous people in Chile to make accessories and an ethical jewelry company, Article 22, which melts land mines to create new baubles and raise money to remove the bombs.

“Well, you know it’s a good party if people are still here past the end time,” remarked one guest as the crew began breaking down the band’s set and clearing the bar.