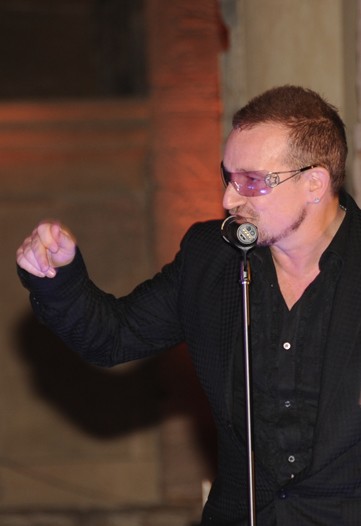 From Richard Avedon and Suzy Parker to Yves Saint Laurent and Betty Catroux, having a muse is as fundamental for a fashion god as knowing how to cut on a bias.

On Monday night, the women whose je ne sais quoi has inspired countless collections gathered with their designer counterparts at the Metropolitan Museum of Art’s Costume Institute gala. And models as muses, the theme of this year’s exhibit, are a thing to be taken extremely seriously, it turns out.

Click to see over 100 images of attendees, from Madonna to Elizabeth Hurley>>

Which might explain why Russell Simmons, who never dated a woman who wasn’t a muse of some sort, arrived solo. “It’s a recession,” he shrugged. Indeed it is. This year, the event raised $5.4 million ($2 million less than last year).

Certainly the beauties cavorting around the party don’t come cheap. Victoria Beckham recently appeared in an ad campaign for Marc Jacobs and arrived on the arm of the designer’s fiancé, Lorenzo Martone. Cindy Crawford — who made millions in her heyday as the muse to designers like Gianni Versace and photographers like Herb Ritts — perused the galleries, which featured lots of dresses she’d worn and a placard explaining her importance in the fashion pantheon. And pantheon it was — the hike up the vertiginous stairs to get to the exhibit left many attendees literally breathless. “Try walking them with your knees locked together,” said Renée Zellweger in a form-fitting Carolina Herrera gown.

The ever-enlightening Gisele Bündchen wanted the world to know that being a muse is very hard work indeed. “For many years, I worked 365 days a year,” she said, as her besotted hubby Tom Brady stroked her back. “You have to make sacrifices. You don’t become successful sitting at home on the couch waiting for things to happen for you.”

Madonna, now the well-paid muse of Louis Vuitton, was working it nearby with a muse of her own, Jesus Luz. When Harvey Weinstein walked up, she introduced them. “Hi, Harvey, this is Jesus,” she said, pronouncing it gee-zus. “I didn’t pick the name.”

“But it is kind of a bonus,” said a guest nearby.

Bruce Willis walked in with his new wife, Emma Heming. Stella McCartney led her pack of girls, including Kates Hudson and Bosworth. Soon after, guests took to their tables in the El Morocco-themed decor.

“As long as there have been artists, there have been muses,” said Bono, in a quasi-philosophical and rambling speech that at one point saw him genuflecting to “the Empress Anna,” aka co-host Anna Wintour. The iconic muses in the room — Twiggy, Carmen Dell’Orefice, Lauren Hutton and Beverly Johnson — also commanded their share of attention from the crowd, but overall, the evening was about feeling young.

When Kanye West and Rihanna took the stage (it was her first big public appearance since her sometime boyfriend Chris Brown allegedly hit her), the entire crowd rose to its feet right in front of the Temple of Dendur in support. Marc Jacobs, Shalom Harlow, Jessica Seinfeld, scores of models and even the Olsens were singing and dancing along as a light show flashed around the walls.

But one can’t be much of a muse these days without being sample size, so there was more smoking than eating at this affair. The ladies’ room drew a mixed crowd, including Olivier Theyskens, Lou Doillon, January Jones, Eva Mendes, Jack McCollough and Lazaro Hernandez. The sinks were filled with wet cigarette butts and there was so much exhaust in the air that even nonsmokers like Zellweger left smelling like an ashtray.

A little before midnight, Francisco Costa, Arlenis Sosa, Coco Rocha and a gaggle of Euros hit 1OAK for a bash hosted by Margherita Missoni and Modelinia.com that benefited OrphanAid Africa. But the real action was at the Monkey Bar with Kate Moss, Doillon, Ford, Justin Timberlake, Jessica Biel, Anne Hathaway, Alber Elbaz and Daphne Guinness. Madonna twirled around the dance floor to her own songs and Jacobs was powwowing with Hudson and Guinness. One of the original muses, Marisa Berenson, sat in a banquette nearby, taking in the scene.

“I’m very flattered to be called a muse, but as a muse, what can I say?” she said. “Muses don’t speak, they just inspire.”