Manolo Blahnik received the Couture Council for the Museum at FIT's Award for Artistry at a luncheon. 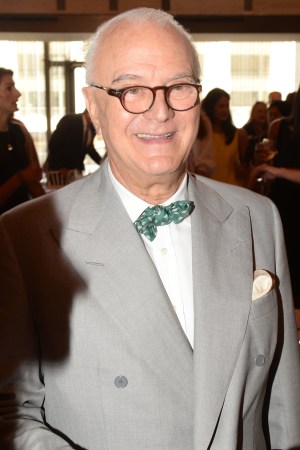 The myriad Manolo Blahnik-shod feet at Wednesday’s Couture Council of the Museum of FIT’s annual luncheon would have given even Imelda Marcos pause. The event, at the David H. Koch Theater at Lincoln Center, honored the footwear designer with the council’s award for artistry, so many in attendance dressed accordingly. Next year’s winner will literally have big shoes to fill.

“I married a beautiful woman and the paparazzi follow her now,” said Alec Baldwin, of wife Hilaria. Asked about her favorite designers, Baldwin said, “Who doesn’t she like? Manolo, Carmen Marc Valvo, Dolce & Gabbana.”

“Manolo is almost an adjective by this point,” said Linda Fargo, senior vice president of fashion at Bergdorf Goodman. “If you can be known by one name, you’re in Madonna territory.”

The event, which marked the 10th anniversary of the luncheon, raised more than $1 million.“This is the first time we’ve honored a shoe designer,” noted Valerie Steele, director and chief curator of the museum.

Martha Stewart attested to the comfort of Blahnik’s designs, adding, “I have a lot. They’re my favorite shoes. I have good feet.”

Uma Thurman dropped in just long enough to deliver the award to Blahnik. “I can honestly say he’s been with me every step of the way — literally,” she said. Blahnik was effusive, but clipped. “I’m not very good in public,” he said. “It’s great to be in America and New York. The generosity of your people…and the wonderful lady from Spain,” Blahnik said, referring to the Spain Tourism Board’s Elisa Ruiz Sáinz, who spoke about the designer’s connection to her country, and whose name he didn’t remember. Blahnik was born in the Canary Islands to a Spanish mother and a Czech father. “New York is one of my favorite cities,” he said. “Thank you, thank you, thank you.”

After he received the award, he said, “It hasn’t really registered yet. It’s a great time and a great moment.” Asked what he looks forward to doing in the city, Blahnik indicated he would do what he always does when he comes to New York: “Going to the movies.”