Jewelry Industry Gathers for Annual Couture Gala at the Louvre

A mix of industry folk and socialites attended the event, organized by Judith Price, president of the U.S. National Jewelry Institute. 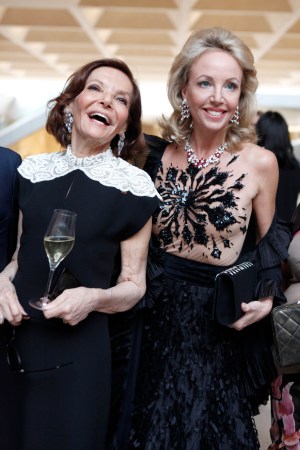 PARIS – Now in its second year, the gala dinner at the Louvre organized by Judith Price, president of the U.S. National Jewelry Institute, drew a mix of industry folk and socialites. The dinner was cohosted by Princess Camilla of Bourbon-Two Sicilies, who wore a daring nude-effect gown, and Burak Cakmak, dean of the School of Fashion at The New School’s Parsons School of Design. The crowd included Fawaz Gruosi, Lucia Silvestre, Solange Azagury-Partridge and Lorenz Bäumer.

“I love vintage jewelry,” Rinna said. “I like new, but I think vintage is really my favorite because it’s almost like history. It tells a story of what was going on at the time, and I’m most attracted to that.”

It’s just as well, since Hamlin has gifted her a series of family heirlooms. “I’m very fortunate that in my family, there were some beautiful pieces that we have remade and reused and repurposed for Lisa, and so far, that has sufficed. I haven’t had to go out and buy any crown jewels,” he said.

Elsewhere, talk turned to the challenging conditions facing the market, as terrorist attacks and political instability dampen the appetite of jewelry buyers. “My personal experience is this year has been the most volatile I’ve ever known in 25 years,” Azagury-Partridge said.

Nonetheless, the London-based jeweler was confident that the industry would pull through. “I know that I always want jewelry. If I’m an average woman, then so does every woman, so I think it’s not something that’s going to die out,” she said.

Price noted that the courses organized by the National Jewelry Institute in partnership with Parsons were already sold out for 2017. Speakers this year included Michael Burke and Pierre-Yves Roussel from LVMH Moët Hennessy Louis Vuitton, and Guillaume de Seynes from Hermès, who is also chairman of France’s luxury trade association Comité Colbert.