Closing the Curtain on Couture Week 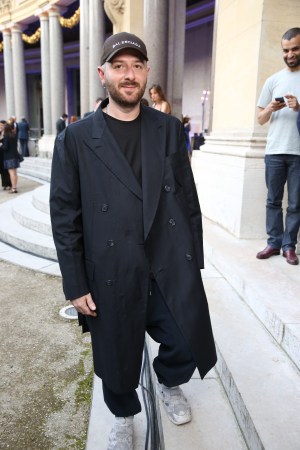 COUTURE COCKTAIL: It’s a wrap. Couture week finished with a cocktail party on Wednesday night at the Petit Palais museum in Paris. And it ended as it had started on Sunday with the Vetements show — with a dose of grit and rock.

Demna Gvasalia, who joined the couture schedule with his Vetements label, popped by wearing a Balenciaga cap and sneakers. “I am off to Berlin for four days tomorrow. For [the concert of metal band] Rammstein. I need some pogo,” he said with a laugh.

Morand was pleased with the week.  “It went well with the five new guest members,” he noted, referring to J.Mendel, Yuima Nakazato, Francesco Scognamiglio and Iris Van Herpen, in addition to Vetements.

Around 700 guests mingled under the colonnades and around exotic plants and a pool festooned with fake golden ducks.

“Everyone is here tonight, all the generations. And it’s quite relaxed. Couture week has become more open: there are pre-collections, jewelry presentations, all types of events,” said Barnabé Hardy, Carven designer for men’s collections. “I think it ‘s a good thing. It gives a nice energy.”

Jarrar was chic in fitted black pants and a black top that looked custom-made for her. “And yet it’s ready-to-wear,” said the artistic director of women’s collections at Lanvin.

Baptista credited Didier Grumbach, honorary president of the Fédération Française de la Couture du Prêt-à-Porter des Couturiers et des Créateurs de Mode, for encouraging young designers to present their collections during couture week. “I showed for five years from 2005 to 2009 during couture week. It was already the idea to be here in the beginning of the season. We were guest members; we created unique pieces but still presented ready-to-wear. It was easier to see all the buyers. This idea is 10 years old,” said the Lacoste creative director. The brand with the crocodile logo is to celebrate its new collaboration with Jean-Paul Goude during Paris Fashion Week in October.

Mabille stressed that couture is good business — about 40 percent of his. Ditto for Zuhair Murad.

Model-cum-jewelry designer Magdalena Frackowiak was sporting a transparent white dress while Cindy Bruna was further upping the glamor ante, in a Zuhair Murad gown with a high slit. “It’s very comfortable, trust me. I have worn dresses that weren’t comfortable,” said the model.

Bruna is to appear in Luc Besson’s next movie “Valerian and the City of a Thousand Planets” alongside other models including Pauline Hoarau and Aymeline Valade. “Aymeline plays the emperor and I play a man too. It’s an avatar story. We just had a mark on the forehead and we were wearing black jumpsuits with dots everywhere to capture our motions.”