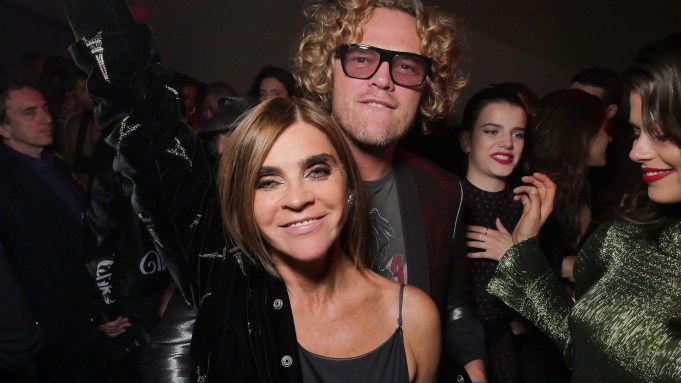 In honor of its 11th issue, released on Sept. 7, Carine Roitfeld’s CR Fashion Book invited designers Olivier Rousteing, Peter Dundas, Giambattista Valli and Jason Wu, a bevy of models including Natasha Poly and Mariacarla Boscono, and many more to “party like it’s 1999” with Ibiza staple Circoloco at Yoyo, the underground club space of the Palais de Tokyo.

In 1999, the Earth’s population reached six billion; John Galliano showed a Matrix-inspired Dior haute couture in Versailles; the Spice Girls made “ath-leisure” a thing, long before the term was even coined, and Vanessa Paradis and Johnny Depp, parents of CR Fashion Book cover girl Lily-Rose Depp, stepped out together for the first time.

As the runways of the season also showed a definite leaning for the decade, that particular year held fond memories for some guests.

“I was turning 15, so my parents organized an amazing party for my Quinceañera,” said Izabel Goulart, whose Fannie Schiavoni chain mail gown channeled “Britney Spears in the 2000s.”

“My first stop would have been the hospital, as it was the year I gave birth to my eldest daughter. But now I get to shop from my closet,” said Princess Deena Aljuhani Abdulaziz, who was channeling the Nineties in her recognizable pixie cut and a sporty lamé Zaid Affas coat over a Rabih Kayrouz dress.

Others, such as Anna Dello Russo, would gladly jump into a time machine. “My first stop would be the Helmut Lang shop, because it was the end, and it had been his decade,” said the editor, who considered herself in a “golden age” working alongside the late Franca Sozzani.

Did the evening live up to Prince’s 1982 prediction? Most definitely, said Dundas, who launched his eponymous label last July. He would have loved to go back to ’99 New York, but “a club just like this one.”

Certainly more than the original year for Poly, who was 15 at the time and busy with school and therefore not allowed out. “I really wanted to hit the Moscow club scene. The music was so good, and it seemed like a mysterious, interesting world.”

If anyone found a single Thom Browne pump with a bow on the steps, it belonged to face of L’Oréal Maria Borges. “One hour and I’m out,” said the model, who was walking in the beauty megabrand’s show the next day, but couldn’t imagine not supporting Roitfeld.