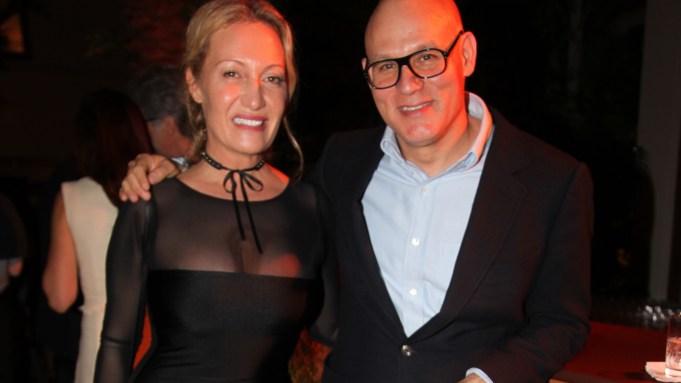 “The mermaids, they live here. They’re full-time,” said Craig Robins, standing poolside in the backyard of his Sunset Island II home, where two woman in mermaid costumes were swimming laps. He turned to his publicist to back him up. “Mermaids don’t leave the water. Susan, they never leave the water, they’re here all the time?”

“They’re from the bay,” chipped in another man standing nearby.

Robins had opened up his lavish art-filled pad, located on the gated Sunset Island II, to host a party in celebration of this year’s Panerai Design Miami Visionary Award winner, SHoP Architects. The firm designed this year’s entrance to the Design Miami fair, which will later be moved across the bay to Miami’s Design District. A previous winning entrance design had been moved to Robin’s backyard, a wooden cube by David Adjaye which guests such as Larry Gagosian — matching his son in white pants and breezy blue top — Jeffrey Deitch, Diana Widmaier Picasso, Elle MacPherson, and Jonathan Cheban could readily admire while lounging on the furniture dotting the AstroTurf.

“When you collaborate with the right people, then one plus one equals five. I think that Design Miami and Panerai, it’s like that,” Robins continued. “And of course, thanks to Panerai I can always tell time.” He pulled up his sleeve to show off his watch. “My sons are all fighting for this, by the way. They all want it, like graduation presents.”

If they don’t get the watch, maybe they can settle for a piece of artwork — Robins has picked up some new pieces for his collection. “I bought some things in Design Miami, and Larry Gagosian and Jeffrey Deitch had that show in the Design District, and I got a few things from there,” he added. “There’s a young artist that’s in the Gagosian-Deitch show called Tschabalala, and that’s my favorite.”

Like many serious collectors at Art Basel Miami Beach, Robins had already claimed his bounty. “A lot of [the action] just happens in the first two hours. It’s crazy though because it’s like, all of the collectors come and they have a lot of pent-up energy. Design Miami that first day was incredible — he sold, like, half of his booth,” he said, gesturing to the man behind him, glass of bubbly in hand. All of that energy calls for some serious R&R.

Nearby, Panerai chief executive officer Angelo Bonati was quietly making the rounds. “I remember when I landed here for the first time, 20 years ago, I was a bit astonished,” he said, reflecting on Miami’s growth in recent years, thanks to developers such as Robins. “I said what is this, this is a village, this is not a city. Now it’s another way.”

And the mermaids swam on.