Members of the venerable rap collective played a launch party for Made Fashion Week. 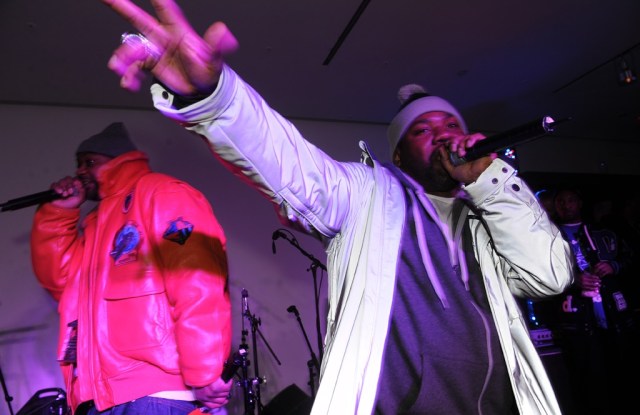 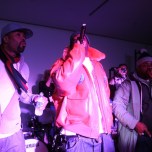 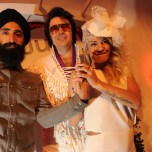 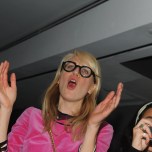 A little before midnight on Thursday, the rappers Raekwon and Ghostface Killah of the Wu-Tang Clan were sitting in a makeshift lounge in the basement of Milk Gallery in Chelsea considering their set list, and thinking a little bit about why they were there.

“Tonight is a more invited situation,” Raekwon explained. “It’s different from a core performance. We’re the guest tonight. We the invited guest.”

The pair, along with bandmate Method Man, who stood off to the side on crutches, were about to perform for a packed house of very cool kids at Made Fashion Week’s launch party. Though hip-hop has taken a turn toward high fashion lately, these were two members of the form’s old guard — the co-authors of grimy New York classics like “Bring Da Ruckus” and “C.R.E.A.M. (Cash Rules Everything Around Me).” (It probably goes without saying that the Clan’s payday had more to do with the appearance than anything else.) Both wore ski caps and sweatshirts and Clarks Wallabees. Ghostface sported a bright orange oversize leather jacket with fur trimming. Their jeans were the opposite of skinny.

“You don’t want to f–k around and go too much, but at the same time, this is what you do,” Ghostface said, breaking into a laugh when asked what to expect of the set list, which they still hadn’t compiled. “Why the f–k they book you? You know what I mean? Seriously, right? It’s like, you know what you getting?”

Jenné Lombardo, co-executive director of Made Fashion Week, made her way over to greet the two men. She wore a wedding dress and veil. At the wedding-themed party a floor above, an Elvis impersonator was presiding over mock weddings at a pop-up chapel. Lexus, a sponsor of the proceedings, had plopped a sedan in the space and painted “Just Married” on its rear windshield. Belvedere Vodka sponsored the open bar. An hour or so earlier, Lombardo had been at the altar with Waris Ahluwalia. Other guests included Cara Delevingne, Constance Jablonski, Lily Kwong, Johan Lindeberg, Theophilus London, Behati Prinsloo and Mick Rock.

“This is my thing tonight, so I can’t thank you guys enough,” Lombardo gushed to the evening’s entertainment.

Ghostface stood up and enveloped her in a hug.

“I’ve been wanting you guys for years,” Lombardo went on.

“She’s been terrorizing me,” the band’s manager confirmed.

Lombardo continued: “The only other person that I think would kill it like you guys would be Dolly Parton.”
There was a long pause before all three broke into laughter. Eventually, an event staffer mentioned that opening act Lissy Trullie was finishing up.

“Do you guys mind if I introduce you?” Lombardo asked.

A member of the band’s entourage stepped in to explain: “Just tell him a couple of your favorite records and we’ll try to splice it in.”