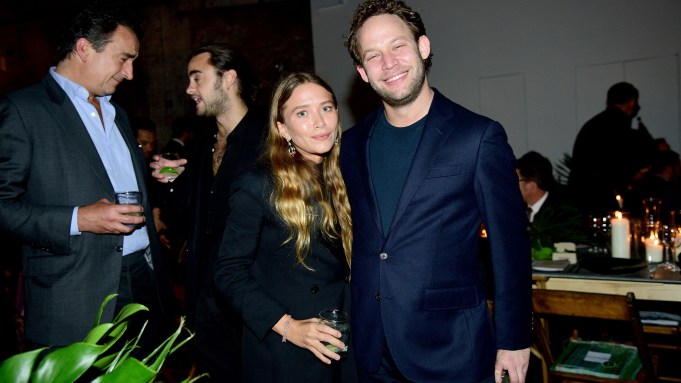 “It was like a dream come true, except that it was like a nightmare come true because it was a house of horror,” Reyes said on Thursday night, standing against a backdrop of his recent illustrations while discussing his 2016 immersive art project, “Doomocracy.” “Two years ago, I came to [Creative Time] and I told them ‘How about doing a house of political horrors, like a haunted house about politics?’ Because there’s nothing more scary than politics,” he added.

“We became huge fans of Creative Time through [former director] Anne Pasternak, who’s now at the Brooklyn Museum, but since then we’re converts,” Arnhold said. The evening was kicking off an art-filled weekend ahead for the couple. “We’re actually going tomorrow morning to Marfa,” Gordon said. On the agenda is Elmgreen & Dragset’s infamous fashion sculpture. “I want to stand in front of that Prada store,” Arnhold added.

Speaking of Texas, Reyes wasn’t the only reason to celebrate on Thursday night: Creative Time was also officially welcoming its new director, Justine Ludwig, into the mix. The young arts leader relocated to New York four months ago from Dallas, where she was director and chief curator at Dallas Contemporary.

“[Creative Time] is an organization I’ve admired for many, many years, so in many ways it’s a dream to step up in this capacity,” Ludwig said. “It also really feels like the right time to be engaged in public art and dealing with social justice issues head on,” she added. “‘What is your dream project that nobody’s had the nerve or bravery to take on, and lets realize it.’ That’s at the core of this organization.”