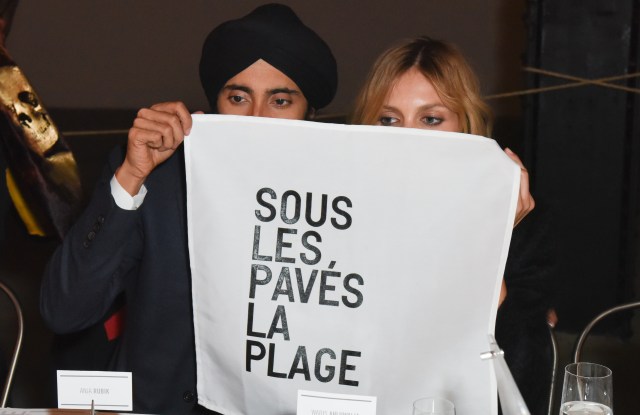 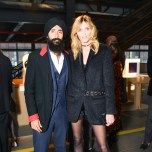 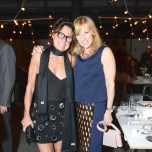 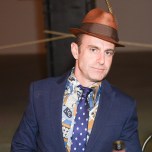 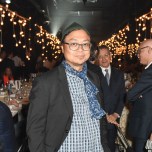 “They all live here on a battleship in the Navy Yard — actually, on an aircraft carrier.”

Artist Duke Riley was discussing the pigeons that make up his latest project in the Brooklyn Navy Yard on Thursday night, where Creative Time was also holding its spring gala. For “Fly by Night,” Riley has affixed LED lights to the legs of more than 2,000 birds, which he will release into the night sky over six weekends, creating a large-scale immersive light show over the East River. Creative Time is the major sponsor for the show.

Riley had a long feather tucked into his hat, and he wasn’t the only one in the room who’d tapped into the bird motif. “Brooklyn Navy Yards, I thought why not?” remarked milliner Gigi Burris as she breezed by the long dinner tables in a long black feathered dress.

“I think it’s really important that the art is brought to the people,” noted Tiravanija, who had created an interactive drink experience with Bombay Sapphire involving fish sauce and ice cream during cocktail hour. “That’s what Creative Time has been able to do, insert things into our life, which is art.”

The gala was set in a cavernous warehouse, which will be transformed into a factory for Mast Brothers Chocolate. Despite being embroiled in somewhat of a chocolate remelting “controversy” last year, business is going strong for the chocolatiers: they recently opened a space in Los Angeles, and will soon begin construction on the Navy Yard factory.

“We desperately need more space,” said Rick Mast. “We were looking around and this space literally took my breath away. This is it, this is our home. This is our forever house.”

The arts organization caught them in just the nick of time. “We just kind of lucked out,” noted Katie Hollander, Creative Time’s new executive director. She had noticed the space while touring the Navy Yard as part of Riley’s project, which launches May 7. “When Duke told us about this [project], I was like this is it, we have to do it,” she explained. “Fly by Night” also offers an element of originality: each “performance” will be different. “The birds, we obviously can’t control them,” Hollander said. But one element is predictable. “The birds always come back at some point. They’re pretty good at coming back, because they’re ready to eat.”

The birds and the gala crowd have at least one thing in common.