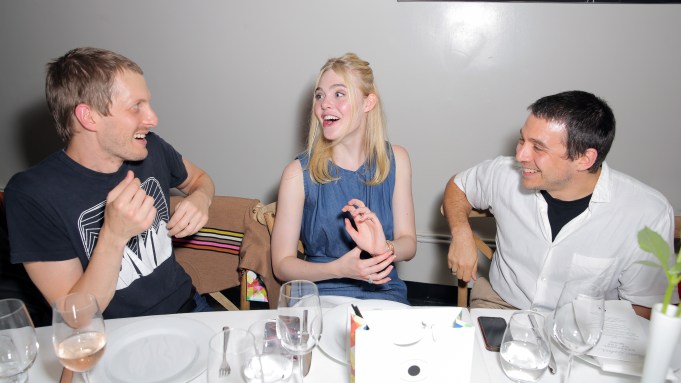 “Whenever I don’t know what to wear, I go to the Seventies. That’s like my safe place,” said Elle Fanning. Not that the young star has any shortage of designers vying to dress her, but she does have her favorites. Among them are Chris Peters and Shane Gabier of Creatures of the Wind, who chose Fanning to host a Thursday night dinner to celebrate their denim collaboration with Los Angeles luxury emporium Just One Eye (she in turn chose to wear a denim jumpsuit from their resort collection).

The black or white capsule collection jeans can be customized with strategically placed embroidery, all via a 360-degree app in-store. “We always like to do special things with our designers,” said Just One Eye owner Paola Russo, who once collaborated with Mary-Kate and Ashley Olsen on an exclusive The Row backpack customized by Damien Hirst.

The large-scale dinner, though, was a first for Just One Eye. Originally conceived as a 40-person affair, the guest list blew up to 100, meaning Russo & co. had to construct even more custom dinner tables, which were upholstered in white denim and curved to resemble the denim embroidery motifs.

Katherine Ross, who cohosted the event with Fanning and Angelique Soave, took note of the idea, perhaps for a future event at Los Angeles County Museum of Art, which is helmed by her husband Michael Govan.

While the boutique resembles a gallery, this was no stuffy art affair, as guests ranging from Rowan Blanchard, Rainey Qualley and Zoe Levin to Asia Chow, Liz Goldwyn and a clutch of stylists packed into the long, narrow space to quaff pre-dinner rosé and bop to music spun by Soko.

“This feels like it’s going to be a rager,” said Peters. “I’m going to go change out of my sweater into something cooler.” By cooler, he meant lighter-weight, as the air conditioning system in the former Howard Hughes office building was vintage.

That wasn’t a problem for the shorts-and-tank-top clad ballet dancers who performed as dinner was being served. Indeed, by the end of the evening, several guests had stripped down a layer, including Soko and Gabier. “I said I was coming back here to ‘get a drink,’ but it’s really because this is where the fan is,” said Chow from the far end of the room. Eric Buterbaugh, who had bought deep into the Gucci high-neck ruffled collar trend, suffered for fashion. “I bought so many of these shirts that I could wear one every day, but I’ve never been able to last an entire evening in one. Tonight is a first.”