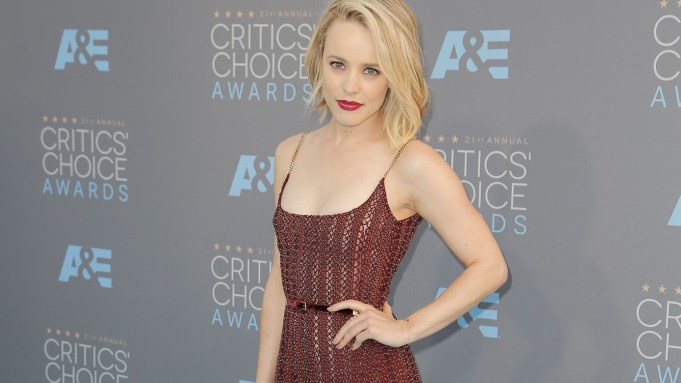 This year’s Critics’ Choice Awards combines film and television categories — nearly doubling the show’s chances of drawing a strong turnout. Needless to say, the red carpet didn’t disappoint. Jennifer Aniston, Rachel McAdams, Rosie Huntington-Whiteley and Saoirse Ronan were among those who turned out in their finest.

While most movie stars used the live telecast as a diversion to avoid interviews, a few, like Bryce Dallas Howard, were happy to talk shop. “I got it from a store called Forward by Elyse Walker,” the retail-loving Best Actress in an Action Movie nominee said of her low-cut Balmain dress. “I’ve alluded to this a little bit before, but when you’re not a sample size or if you don’t have a direct relationship with a designer or if you don’t have a lot of notice — those size six dresses aren’t available. What I’ve found is, if something is last-minute, I go to Neiman’s or I get something online.” As for the dress’s plunging neckline, the actress laughed, “I’m really taped and I’m touching my breasts a lot, making sure that the tape is still sticking. I hope it’s not awkward for anyone.”

Another film star, Jacob Tremblay of “Room,” relied on a little help from family. “My mom and my dad helped me get ready,” said the nine-year-old, whose tie featured monkeys.

Fashionably adventurous writer/director Paul Feig also went sans stylist. “This is a little Ralph Lauren action,” the “Spy” nominee said of his velvet tux with satin lapels. “I get in there and buy this stuff. When I did the Globes, I wore a Tom Ford jacket with a little more color to it, so I thought I’d go more basic black, but give it a little pop.”

“I know how to dress,” insisted nominee Wendi McLendon-Covey. “Borrowing things? Free is just too expensive, let me tell you. It’s such a headache. I prefer to do it myself.” Added Tracee Ellis Ross, “Sometimes I work with a stylist. Sometimes I don’t. For award shows, [borrowing] is probably the easiest. And I like to be smart with my dollars. I am a girl who has a closet and loves to shop.”

For her part, Gina Rodriguez sang her stylist Lauren Rodriguez’s praises. “We’re not related, but we’re soul sisters,” she said. “My stylist is like the love of my life. She’s been styling me since before I had money to pay her. She knows how I want to represent myself.”

Meanwhile, Best Actress in a Comedy Series nominee Constance Wu worked with Jessica Paster to select her cornflower blue Peter Langner gown. “I really loved the color,” said the “Fresh Off the Boat” star. “I was inspired a lot by Alessandro Michele at Gucci.” Does she aspire to be dressed by Mr. Michele himself? “Maybe one day. I’m not getting that kind of stuff yet. I’m so new to red carpets that I’m still figuring it out.”

Mary J. Blige, nominated for her role on The Wiz, selected J.Mendel for the occasion because “it’s easy. It’s comfortable. It’s sleek. It’s couture. It’s everything that all the award shows are. I felt like being classy and chic….I hope that’s what I am.”

Wes Bentley said that the men have it far easier than the women. “It doesn’t matter at the end of the day if I’m wearing something well, no one is going to talk about it,” said the Armani-clad “American Horror Story” nominee, “but for women, no matter what you do, they’re going to talk about it good or bad and that’s a pressure I wouldn’t want. I feel for them.”