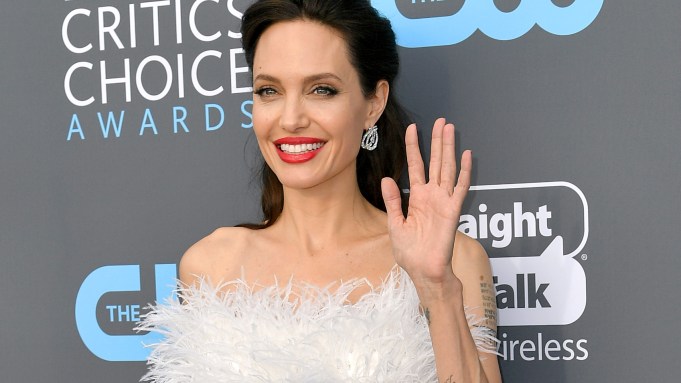 “We talked a lot about what to wear today,” admitted Bosworth, “because I feel symbolism is more powerful than ever.” She said she was “moved” by the sea of black last weekend. “The unity of wearing all black was powerful. There’s a sense of grief and heaviness because of what everyone has carried for so long, this feeling of being either diminished or abused or harassed in some way, but what comes out of that is the idea of after the dark comes the light.”

Bosworth said she collaborated on her custom Brock Collection gown with that in mind and added, “It was important to me to work with a female designer [Laura Vassar] and her husband [Kris Brock] is incredible,” she said of the husband-wife design team. “I’m lucky I have a husband who is…” “Blocking the sun,” joked her husband Michael Polish.

She laughed, then finished, “Who is a feminist and who supports Time’s Up and supports all of us. It was important to reflect those feelings in the design.”

Meanwhile, Golden Globe winner Rachel Brosnahan was still reeling from last weekend’s win. “I don’t remember any of it,” laughed the starlet, clad in pale pink Zuhair Murad. “Truly. I have no idea. I’m too scared to [watch a replay of it]. I don’t need to relive one of the most terrifying moments of my life.” Yet she did, picking up the best actress in a comedy series trophy for “The Marvelous Mrs. Maisel.”

Hunter certainly looked the part in a formfitting navy Zac Posen dress. “I like to wear his clothes because I like him,” she said. “I think he’s got a really discerning eye. When I put his clothes on and he’s in the room, he’s very critical of his own work and I love that. I’m appreciative of that as an actress who mainly works with costume designers.

Yvonne Strahovski of “The Handmaid’s Tale” was among those who selected a colorful, patterned dress for the affair. “I was so proud to stand with my fellow women at the Globes and wear black dresses, but I like to change it up. I’ll switch it up again for the SAGs. I think I’ll go a bit more glam-y.”

Norman Reedus arrived with girlfriend Diane Kruger. Both actors were nominated for their respective projects, “In the Fade” and “Ride with Norman Reedus.” His red carpet prep took a little less time than Kruger’s. “It took me 10 minutes to put this on,” he said of his Ermenegildo Zegna Couture suit. “I’m fast.”

Presenter Kiernan Shipka rocked a funky pastel Delpozo look. “I wanted to wear something that was fun and quirky and interesting and beautiful,” said the new “Sabrina the Teenage Witch” star.

Fellow presenter, “Blindspot” actress Jaimie Alexander, selected an emerald green Georges Chakra dress. “[Black at the Globes was] a peaceful way to make a statement. There are going to be many other opportunities to, again, unite and show solidarity — like at the SAG Awards with all female presenters — but it’s about lifting each other up. I see so many people here in so many different colors and that’s fun. It’s fun to celebrate your personality.”