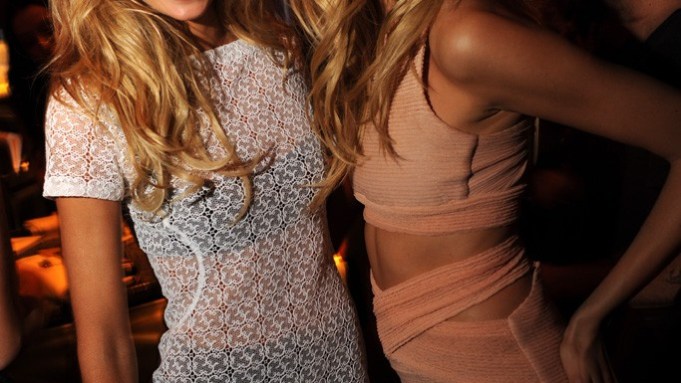 “Tell me that it’s awesome? Is Taylor grinding up on the Angels?” That was a text message from a young man who was devastated he had not been allowed into the after party of the Victoria’s Secret Fashion Show at Tao Downtown in Manhattan Wednesday night. Can you blame him? Any red-blooded American male would have killed for a peek inside. Alas, only the cream of New York’s modelizers were granted access into the forbidden city, a magical land where Amazonian models with names like Adriana and Karlie and Doutzen roamed free and the bubbly never stopped flowing. The Taylor in reference was Taylor Swift, the singer who performed during the show at the 69th Regiment Armory.

Leonardo DiCaprio, Adam Levine, Michael Bay, Tiësto, Stephen Dorff — they were all there in Tao’s inner sanctum, staring gobsmacked at the abundance in riches, just simple admirers, really, of the female form. No big deal.

“It was cool,” said Dorff, affecting nonchalance. TLC’s “Creep” played in the background. “Not a hard show to look at.”

So I creep yeah/Just keep it on the down low.

Did he think he had a chance with any of the models? “I know some of them. But I didn’t go for that,” Dorff said. So I creep yeah. “I just went to chill and hang with my buddy.”

Dorff was in one of the antechambers at Tao, the sprawling new complex in Chelsea. Rubberneckers convened around a twisted staircase to watch the models descend from the public and more paparazzo-friendly entrance off Ninth Avenue. One by one they emerged to an avalanche of camera flashes and the collective satisfaction of a room full of mainly mortals.

Jessica Hart had just arrived from walking the show.

“It’s just 100 percent fun. Yes, there’s a little bit of nerves but that just pumps your adrenaline,” she said.

She was asked about Swift. Could she pull it off as a Victoria’s Secret model?

Hart was making time until she shimmied to the dance floor. “I think, you know what, god bless her heart. I think she’s great,” she said. “But, I don’t know, to me, she didn’t fit. I don’t know if I should say that. I think what you find is that for a lot of us, we’ve been working for 14, 15 years; what it takes to make it here comes from experience and confidence and knowing how to be confident with yourself. I think it comes with age. It’s definitely the benchmark of all jobs.”

So it was that models and modelizers fraternized, some more successfully than others. Sunnery James arrived with girlfriend Doutzen Kroes. DiCaprio, who is dating model Toni Garrn, arrived much later in the evening with actor Lukas Haas, a charter member of his wolf pack. Levine, Dylan McDermott, Idris Elba, Chris Evans, Stavros Niarchos and Pete Wentz were also prowling the premises.

The party was as star-studded as the front row at the show had been earlier. They were all lined next to each other, the guys beaming in anticipation like it was Christmas morning but feigning cool — Henrik Lundqvist, Michael Strahan, Robinson Cano and Theo Wenner. The one anomaly in the front row was Valentino Garavani and Giancarlo Giammetti.

“I’ve been here maybe six times,” said Bay, who besides the “Transformers” franchise has also directed Victoria’s Secret commercials. “I keep coming back because they’re great clients of mine.”

“They’re here to dream, to fantasize,” the singer said.

Anthony shot back, “They are here to drool.”