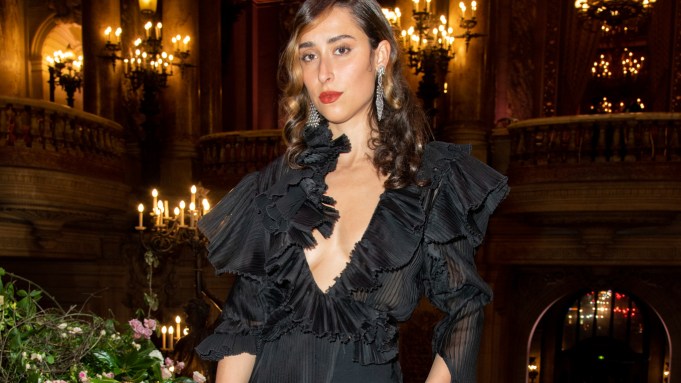 SHINE BRIGHT: When in doubt, add some shine.

Ludovic de Saint Sernin accessorized his going-out look — a see-through organza shirt from his own collection — with a Swarovski crystal-embellished mini bucket bag.

“I made this specially for the Woolmark Prize. I had some crystals left over from my collection so I thought, why not,” said the fashion designer, who was shortlisted for the 2019 edition of the prize.

De Saint Sernin was one of the guests at the Paris Opera gala on Thursday, held in partnership with Rolex in honor of the 40th anniversary of the “friends of the Paris Opera” organization, or Association pour le Rayonnement de l’Opéra de Paris in French.

The association, chaired by Dr. Leone-Noëlle Meyer, has helped finance a number of projects, including the production of new shows, international tours, renovations and the development of educational programs.

Moments before the gala started, guests ascended the staircases of the Palais Garnier to get to their seats, chatting excitedly and stopping to take pictures next to the elaborate floral displays. There were evening gowns, rhinestone-studded handbags and elbow-length gloves; an opera-goer even added a long train to his evening suit, breaching etiquette in the name of gender-bending.

“It’s actually vintage: I bought it at the Paris flea market a couple of weekends ago,” said the designer. “It dates from the 1930s I think. I got lucky: I didn’t even need to have it altered; it fit me perfectly. I bought it thinking it would be perfect for the opera, because the red fabric and gold details match the room’s color scheme.”

Artist Chloe Wise, musician Clara Luciani, model Evan Mock and actress Céline Sallette were part of the crowd milling about in the lobby.

The Palais Garnier brought back fond memories for Soko.

“This is where we shot ‘The Dancer,’” said the singer and actress, who played dancer Loïe Füller opposite Lily-Rose Depp as Isadora Duncan in Stéphanie Di Giusto’s 2016 film.

“It was kind of crazy: as we could only film from midnight, we would shoot from midnight to 9 a.m.,” she recalled. “It’s pretty hard to dance so late. But my favorite memory is dancing in front of my parents, who were extras in one of the scenes, for my 30th birthday.”

Soko, who attended the event with her girlfriend Stella Leoni, has just finished shooting three films, one of which, “Little Fish,” will premiere at the Tribeca Film Festival on April 17. “And my next album will be released end of April,” added the artist.

The evening went on with a performance from the Paris Opera orchestra and chorus with special guest appearances by celebrated singers, including South African soprano Pretty Yende. A dinner was then held under the gilded ceilings of the Palais Garnier; in total, donors helped raise 400,000 euros, or $440,000, for the activities of the opera.