Cochairs Oscar de la Renta and Diane von Furstenberg were both in attendance, as were a host of well-dressed opera-files. 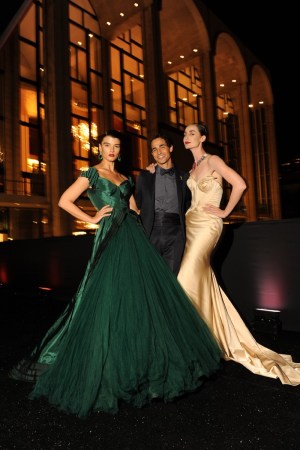 CURTAIN RAISER: The New York City fall social circuit continued apace on Monday at the Metropolitan Opera’s opening night gala. Cochairs Oscar de la Renta and Diane von Furstenberg were both in attendance, as were a host of well-dressed opera-files including Ari Graynor, Courtney Love, Cheyenne Jackson, Zac Posen, Crystal Renn, Jeisa Chiminazzo and Sia. After the show, a production of Donizetti’s “L’Elisir d’Amore,” New York Knicks forward Amar’e Stoudemire was accompanying his fiancée, Alexis Welch, to the cast dinner when he gave a quick assessment. “This is the second one I’ve been to. You’ve gotta have an inquiring, artistic mind to be at the opera,” Stoudemire said. “And have a good aisle seat, right?” Welch added with a smile.