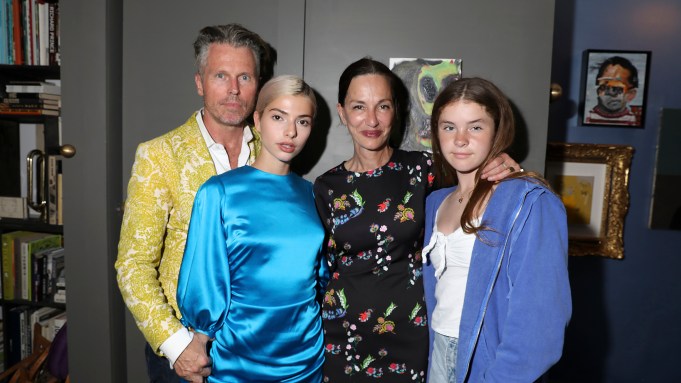 It was just a few hours shy of the official start of summer, and the backyard pool at Bill Powers and Cynthia Rowley’s downtown home was empty despite the occasion: a party. Who would be the first to take the plunge?

“I don’t think it’ll be Jeff,” said Rowley, glancing across the room at Jeff Koons, who was huddled by the bookcase with Bernard Ruiz Picasso. “Maybe it’ll be me — it’s getting a little warm in here.” The designer was putting the finishing touches on a dinner spread as guests continued to stream through the front door, many of whom were coming from the opening night of “Cliche,” a group art show curated by Powers at Almine Rech Gallery.

“It’s interesting to see how artists can either embrace or subvert the idea of cliché,” Powers said. “Clichés are only clichés because they were used too much. When they started, they had real power, and they only became clichés in the ubiquity of the imagery.” He paused the thought to show Koons and Picasso — also Rech’s husband — a book on Pop Art, which was wedged on the shelf between tomes featuring Koons himself. The famous pop artist has art in the show, work that’s never been on display; sort of. “It’s kind of funny: famous artists showing student work,” Powers said. “He showed a piece from 1974, when he was at the Baltimore School for the Arts, that had been hanging at his mom’s house for 40 years that had never been shown in a gallery setting. Next to a John Currin painting he made in high school, that had been at his mom’s house.”

While many young artists shy away from cliché — which can often be interpreted as a synonym for “bad” — Sam McKinniss has a different take. “That’s kind of my jam, I get really excited about images that repeat themselves over time periods,” he said. “It kind of means that it means something, I think. Like a meme.” For the exhibition, McKinnis created two works; a still life of a lobster on a dinner platter, and a painting of Prince George.

“Because he’s cute, and people are excited about him,” McKinnis explained of the latter piece. “And he turned into a meme, he was born famous because he’s royal family, so he’s already a meme — his photographs are always being repeated,” he added. “He’s gonna have to deal with being a cliché for the rest of his life.”

But that doesn’t sound so bad, does it?