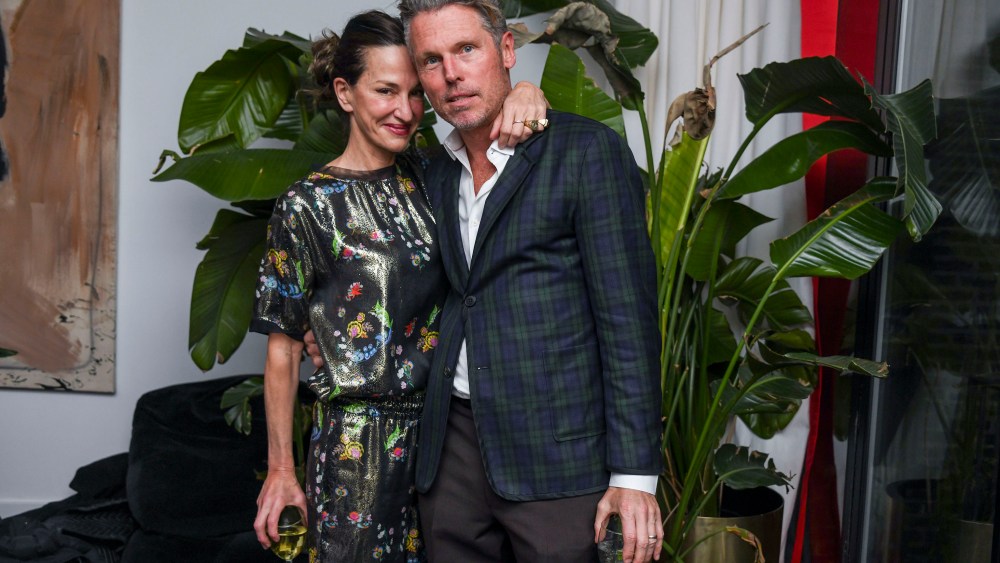 “I never go to house parties so tonight is a rarity,” remarked model and musician Ruby Aldridge. “Nobody has a house to even party in here in New York — except for Cynthia Rowley.”

On Friday evening, the designer and her husband, gallery owner Bill Powers, welcomed friends to their West Village town house for a casual dinner party in celebration of L.A.-based artist Geoff McFetridge’s latest solo exhibition at Powers’ Half Gallery in New York.

As a band of young musicians from the LaGuardia High School of Music & Art played from a second-floor landing, Rowley floated around in a gold lamé top and matching pants from her fall collection.

“We don’t do a ton of entertaining here,” said the designer, standing beside a fur chaise longue next to the home’s front door. “There are always a lot of teenagers here because of my kids. They literally have 10 to 15 kids over every day. The pool out back is heated so tomorrow there’s a giant pool party happening. I’ve become what my mom was to me, which was the fun house.”

Rowley interrupted herself with a thought of how the evening’s culinary offerings — which included grilled cheese sandwiches and vegetable crudités — could be enhanced. “Actually, why didn’t we make cotton candy tonight? We have a full-on professional cotton candy machine downstairs,” she explained before dashing off to make her vision a reality.

McFetridge stood at the back of the packed room, surveying the crowd. “I feel very lucky,” said the artist, whose stylized graphic paintings are on display at Powers’ Upper East Side gallery through April 4. “I get customized friends here tonight — now I instantly have cool friends.”

Other guests included fellow artists Chloe Wise and Dustin Yellin, aspiring filmmaker (and daughter of Rowley) Kit Keenan, Tavi Gevinson, Jacquelyn Jablonski and Prabal Gurung, who all gathered beside a gilded baby grand piano filled with bottles of beer and bubbly on ice.

The artist of the hour views drawing — not painting — as the most rewarding part of his creative process. “I could do five drawings in five minutes, which could then become five paintings. But if you’re thinking with paint, that five minutes will go by and it will be inconsequential because of how slow the creative process is with paint. I consider my drawing process more related to writing. What I’m doing, really, is note-taking and poetry, just in a different form,” he said.

As the crowd began to wane, Prince Albert II of Monaco’s daughter Jazmin Grace Grimaldi chatted with musician Ian Mellencamp about participating next week in the Rallye Aïcha des Gazelles du Maroc, an all-female auto race through the Moroccan desert.

“I’m a little nervous,” revealed the 26-year-old Grimaldi, who will rely solely on a map and compass to reach various checkpoints along the two-week fund-raising expedition, which she hopes will also raise awareness of her own charitable endeavor, The Jazmin Fund. “We’re riding for the Cœur de Gazelles, which is all about female empowerment and helping get women sustainable jobs and health care in Morocco.”

Wearing a green plaid blazer designed by his wife, Powers shuffled past Grimaldi and a group of women lounging on the floor and nervously pulling wooden blocks from a teetering Jenga set. Holding a small metal sculpture in the palm of his hand, Powers quietly remarked, “I’m just going to put this Louise Bourgeois near where it won’t go missing.”

The art dealer then bounded downstairs to his home’s ground-level rumpus room. Sprawling on a white rattan daybed covered in a Sixties pink floral fabric, Powers described McFetridge as having “a hand in different kinds of cultural currency” with a résumé of design work for Opening Ceremony and Standard Hotels as well as collaborations with Spike Jonze and Sofia Coppola. “Sometimes art can be deceptively simple when it has a flat graphic style,” he said. “You’ll look at it and in one second you’ll think you have the whole picture figured out, but Geoff complicates that language even though it looks quite simple on the surface.

“It’s fun to host stuff at your house as long as I don’t have to clean up, which we’ll see,” added Powers, who straightened his brown tuxedo pants upon standing. “These are actually the Prada tux pants I got married in [in 2005]. Sometimes Cynthia thinks it’s sacrilege for me to re-wear these pants to a party, but it’s either I leave them in the closet forever or I enjoy them. Plus they still fit,” he boasted as the nearby cotton candy machine began to whir.

Not in Austin for SXSW? A Recipe From Elizabeth Street Café to Make at Home