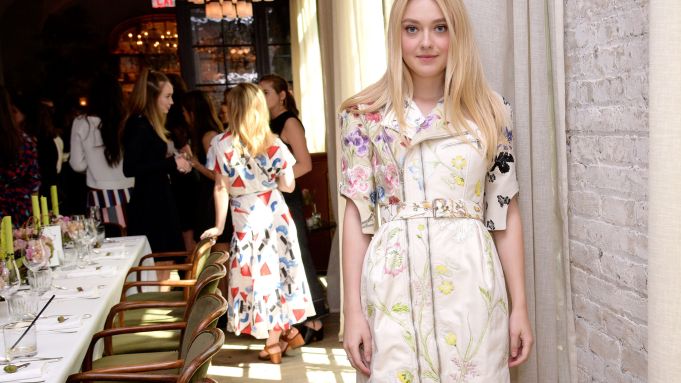 Models including Nina Agdal, Chanel Iman, Stella Maxwell, Hailey Baldwin caught up on boys, their fashion week accommodations (Gramercy Park Hotel versus a friend’s Chinatown couch), and this week’s upcoming schedule. “Fashion week is, like, my hibernation week,” one model said to a cohort in the midst of an oyster slurp.

“Clara Bow. And only Clara Bow and Chloë Sevigny — that’s it forever and forever more,” Lyonne said of who embodies the “It Girl” title in her eyes. “You know what it is — the plural of “It Girl” waters it down. Clara Bow was ‘It,’ it was such a singular event at the word’s inception.”

“I’m doing a real Opening Ceremony, Rodarte, Kenzo bonanza,” Lyonne added of her fashion week schedule — and she revealed she’s set to appear in the Opening Ceremony show, but offered the following as reasoning why she couldn’t say more: “Life is a high stakes operation and you can’t just run around town flap-jawing to every Sally and Sue you run into at every ‘It Girl’ bruncheon around town.”

“Well, it’s no question, I would say Karlie Kloss,” said “Scream Queens” actress Skyler Samuels of her ultimate “It Girl.” “To me she’s both nerdy and glamorous, which I have such a soft spot for. She’s so smart and so gorgeous, and so well-rounded. But I’m also obsessed with Bella and Gigi, so if they could share the title, that would be great.”

“Lynn Hirschberg,” Fanning said of her quintessential “It Girl.” “I’ve been coming to this lunch for the past several years and I’ve known Lynn for a very long time and I want to be her when I grow up. I appreciate her so much because of her love of film, and I think she crosses film and fashion in a really interesting way.” Fanning will be missing out on her favorite Rodarte show, as her Toronto International Film Festival schedule takes her away from the action. “But I’ve been many times in the past.”

Fanning will head to Toronto with costar Aduba to promote their film “American Pastoral.” “I only just watched it last night — all summer dates were set up to go see it, but I was on the ‘Orange [Is the New Black’] international press tour, or enjoying the Fourth of July, or what not,” Aduba said. “And this is the first time I’ve ever done a movie-movie, and so I was sitting there in this private theater, by myself, at the Tribeca Film Center, in the screening room, and the Lionsgate promo came on, and I was, like, ‘This is a movie! I’m in a movie!’” A movie star and an “It Girl,” all in one.