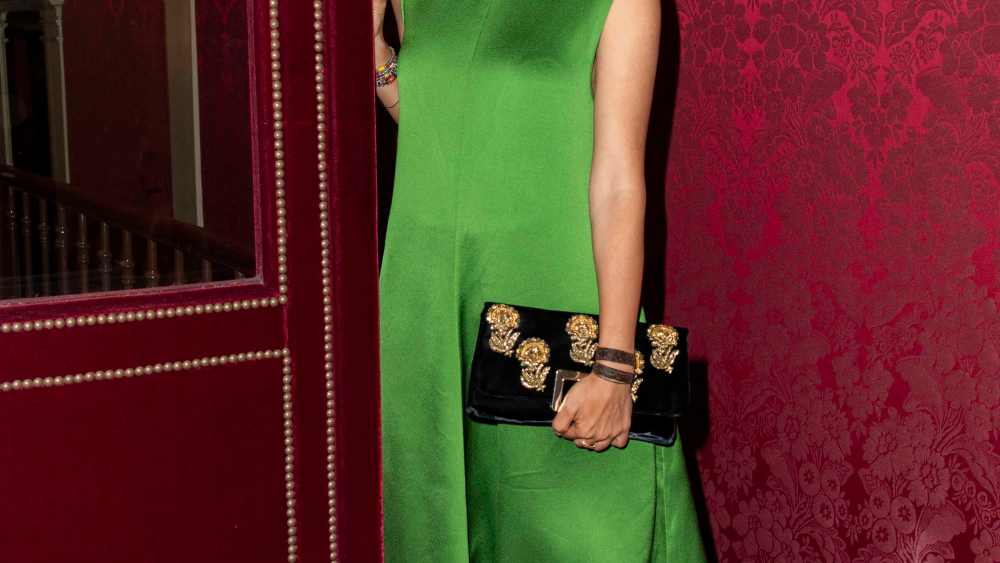 One of the most famous buildings in Paris, the Paris Opera, celebrated its 350th anniversary on Wednesday — and it went all out.

A flurry of glamorous guests including Meg Ryan, Maggie Gyllenhaal and Golshifteh Farahani mounted the central staircase of the Palais Garnier, surrounded with an installation of wild flowers by florist Eric Chauvin.

The audience took their seats under the venue’s stunning ceiling painted by Marc Chagall to enjoy a performance by Russian soprano Anna Netrebko, as part of the fund-raising gala supported by Schiaparelli and Rolex.

There was a certain frisson about spending the evening in such a famed landmark, known for being the setting of Gaston Leroux’s novel “The Phantom of the Opera.”

“I definitely think there are emotions and vibrations that have stayed within these walls,” murmured actress and model Aymeline Valade, while taking in the gilded ceilings and chandeliers.

But all eyes were on the Paris Opera conductor Lorenzo Viotti, despite his rather less flamboyant outfit — a black tailcoat.

“He’s so young, and yet so brilliant,” marveled jewelry designer Gaia Repossi at the intermission, during which the chatter centered on the 29-year-old musical prodigy — and his good looks.

As Haider Ackermann helped Setsuko Klossowska de Rola put on her coat over her kimono, AMI designer Alexandre Mattiussi was still reeling from the performance.

“These kind of moments are breathtaking,” said the designer, who is working hard on his next men’s show, set for June 18 in Paris.

“It’s a real gift to be able to come to such a beautiful place, turn off your phone and get swept away by the beauty of the moment. Things go so fast nowadays that you have no time to feel things anymore, so tonight is like a pure shot of emotion.”

After the performance was over, guests moved on to the opera’s upper level for dinner, carefully picking up trains and gathering long dresses to ascend the stairs.

“It’s such a pleasure to see women wearing evening dresses, it’s so rare nowadays,” said Vanessa Seward, herself in an elegant midnight blue bustier dress by Christian Dior. “Everyone is very chic tonight.”

Farahani was looking particularly striking in a green Maison Rabih Kayrouz satin gown, in contrast with the deep red velvet walls of the opera’s lobby.

“I’m more of a ballet fan in general, but tonight I really felt like I could become obsessed with opera,” the Iranian actress said. “I feel like tonight’s performance healed my soul a little bit.”

The setting for dinner was truly breathtaking: the painted ceilings were lit by dozens of huge chandeliers, under which guests sat down to enjoy a meal prepared by Le Bristol chef Eric Fréchon.

It was Ryan’s second time at the Paris Opera: She first came on a school trip when she was in high school.

“It’s definitely bringing back memories. Can you believe this room?” gushed the actress, who was sitting at the Schiaparelli table. “It really hurt my heart, as I’m sure it did for everybody, to see the fire at Notre Dame. So it’s important for me to come and celebrate an institution like this. We have to appreciate what we have.”

Sitting next to Farida Khelfa, Gyllenhaal happily chatted about her next project: Starting spring 2020, the actress, who is filming the next installment of the HBO series “The Deuce,” will direct an adaptation of Elena Ferrante’s novel “The Lost Daughter.”

“It’s not part of the Neapolitan novels, but one of Ferrante’s separate stories,” said the actress, who remembered feeling chills when she read Ferrante’s “The Days of Abandonment,” the story of a stay-at-home mother’s breakdown following the end of her marriage.

The clock struck midnight, and guests were ushered toward a side corridor leading to the evening’s big surprise. A gigantic dance floor had been erected on the opera’s stage, complete with a giant disco ball and a DJ set by Kiddy Smile, where partygoers danced until the early hours of the morning.