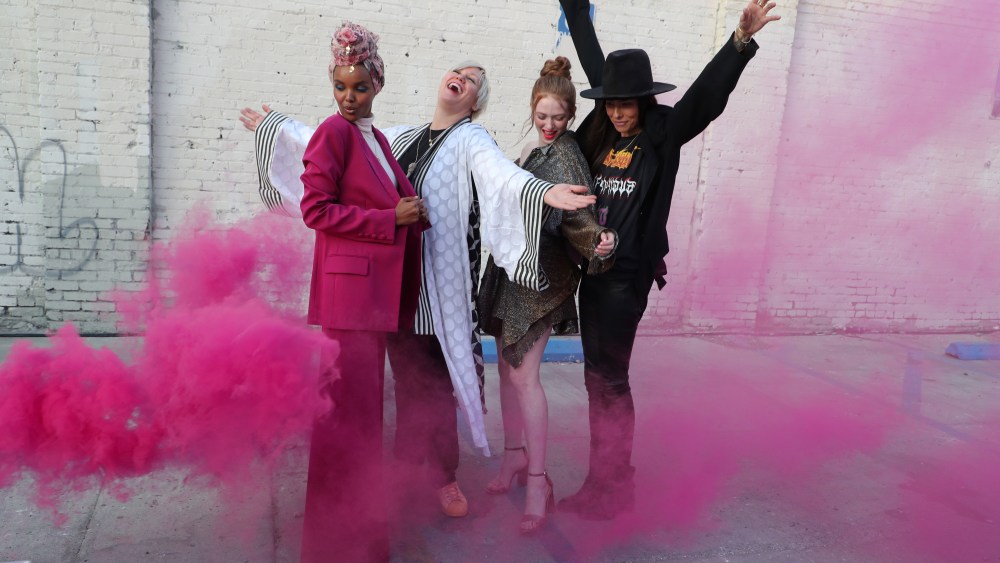 LOS ANGELES — “My first piece of jewelry was a charm bracelet that my mom gave me when I was a little girl,” said breakout “Euphoria” actress Sydney Sweeney. “Ever since then, she and I give each other charms. I’ve always had Pandora in my life.…My dad and I would always go and get her different charms everywhere we’d go. It’s a cool, little thing we do.”

Pandora, the Danish jewelry company and retailer known for its variety of customizable charms, is revamping its image and chose L.A. as the destination to celebrate the relaunch and a line that includes an O pendant necklace and various charms, out today. On Wednesday night, from 6 to 11 p.m., the international brand took over downtown L.A. studio space Hudson Loft, its outdoor lot and alleyway entrance — painted pink, Pandora’s new official color. As guests arrived, they mingled amid colorful murals, notably C. Finley’s “Divine Feminine,” before heading inside.

“Honestly, I don’t go outside that much, so it hasn’t hit me,” Sweeney, full of giggles, said of her recent rise in acting. The 21-year-old appeared in Quentin Tarantino’s “Once Upon a Time in Hollywood” and had a recurring role on Hulu’s “The Handmaid’s Tale,” but it’s HBO’s controversial “Euphoria” that’s brought her a new level of attention. “I appreciate all the fans and the love. It’s incredible…I’m excited for season two of ‘Euphoria.’ I cannot wait to get back to that. I also have a few projects I’m about to start that I can’t wait to talk about.”

Standing nearby was Rosa Salazar, star of Amazon Prime Video’s upcoming animated series “Undone.” The project, which uses rotoscope animation throughout — a new endeavor in the industry — was a hit during Comic Con last month.

“It’s an emotional roller coaster,” said Salazar of the show, out Sept. 13. The actress also played Alita in Robert Rodriguez’s “Alita: Battle Angel.” “It is a crazy, f–king jaunt through the universe, and it’s funny as hell. I’m so excited, and I want everyone to enjoy it and to just feel something when they watch it. I think it’s going to be big…This is one of the only things in my whole career that — not only am I proud of it, but it’s also something that I would watch, would love if I wasn’t part of it. It’s a benchmark in my career.”

The party attracted a slew of celebrities and influencers, most of them women donning pieces from the brand’s various collections. In fact, many in the room had at least one piece of jewelry from Pandora; upon entry, the world’s biggest jewelry maker, founded by Per Enevoldsen in 1982, gifted attendees the O pendant necklace with a few charms (the pendant alone retails at $55). Along with Pandora’s creative director Stephen Fairchild and its new president and chief executive officer Alexander Lacik, the over 400 guests included models Shanina Shaik, Georgia Fowler and Sarah Snyder, skateboarder Evan Mock and actresses Hari Nef, Victoria Justice, Guan Xiaotong and Marsai Martin, of “Black-ish.”

“Number one, I love jewelry,” said 15-year-old Martin of showing up in support. “I always love these types of events where it’s fun and festive. I worked all day, and this is all I was thinking about.”

“It was quite strange, because immediately we got there the first day, and us girls, we all got along so well, and now we’re all friends,” said Jagger of shooting the ad in Copenhagen. “And I really mean that.…We had dinners, all hung out and got to know each other. I just feel completely amazed that I was even included in this group that I find so amazing. Like, why am I here?”

The 27-year-old daughter of Mick Jagger and Jerry Hall had dyed her hair pink that morning for the occasion.

“It’s my own hair brand,” she said, tugging at a streak. She’s a partner at Bleach London, a U.K.-based hair salon and label that’s expanding to L.A. on Melrose Avenue this winter. “We have three locations and a whole product range, including hair dye.…I have an office, a base. In fashion, I was moving around all the time, and now I have a base.…It’s not a normal job but somewhere I can go that feels like home.”

Between DJ sets by duo Coco and Breezy and man-about-town Luka Sabbat, the night ended with musical performances by Charli XCX and crowd favorite SZA, who played hits like “The Weekend” and “Broken Clocks.”

“I can’t wait to see SZA,” Aden had shared earlier. The 21-year-old is the first woman to wear a hijab in the Miss Minnesota USA pageant, and this year, she also became the first woman to pose in a burkini for Sports Illustrated’s swimsuit issue.

“We all need to have our firsts, and for me, being a young Somali-American refugee, I have to show the little girls in my community that it’s OK to step out and be the first and try new things.…Sports Illustrated, for me, was life coming full circle. I get emotional just thinking about it. I started out with the burkini at Miss Minnesota USA in 2016 and so much has happened in my life since,” she said.

Saying “yes” to Pandora was a no-brainer, she shared.

“The fact that it is bringing together women from all different walks of life to be the first ever Pandora muses, I couldn’t have said no,” she said. “But also, the fact that they give back and empower the community that they source from, that also matters to me. I always strive to work with brands who are conscious.”

“And at the end of the day, I’m a girl,” she continued. “Beautiful jewelry? Sign me up.”