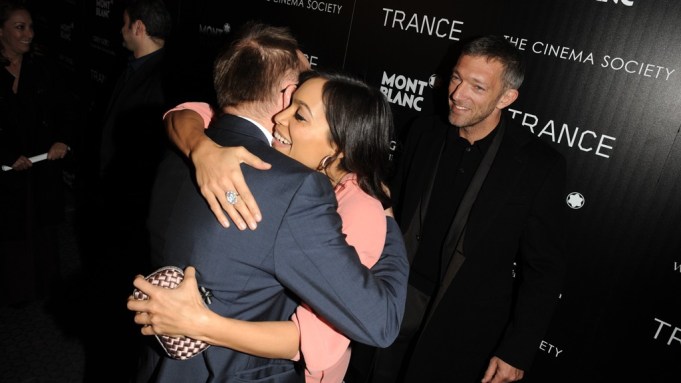 “At the beginning of the film, we had a montage from about 20 different heist movies, which we cut together finishing with Bond in Dr. No’s lair looking at a Goya painting. It was the ‘Duke of Wellington,’ going ‘So that’s where it went,’” Danny Boyle said Tuesday night at the SVA Theater in New York. “And then we went and priced it and it cost a third of the cost of the film, that one-minute montage. So unfortunately none of that’s included, but there you go. We’ve got our own little heist, which is value for money.”

The British director was in town for a Cinema Society- and Montblanc-hosted screening of his latest movie, “Trance,” which indeed begins with its own stolen Goya from a fictional London auction house and then dives into deeper psychological territory. Though James McAvoy was busy with “Macbeth” on the West End, his coleads Vincent Cassel and Rosario Dawson were on hand, along with a pack of cinemagoers that included Emma Watson, Gemma Arterton, Anja Rubik and Norman Reedus.

Dawson, who plays a mysteriously motivated hypnotherapist (thus that title), was happy to chat about her occasional kleptomaniac impulses.

“I’ve had a weird thing, and I’ve stopped since, but I had a weird thing about stealing Christmas ornaments,” Dawson laughed. “It was always those huge [trees] like in a big, big store or lobby. It was never anyone’s home or personal ones or anything like that.”

After the screening, guests moved on to a private penthouse in TriBeCa, where Dawson eschewed the catering in favor of two pizzas she brought in with her “and the Mexican Coke with real sugar — no high-fructose corn syrup.”

“You’re in New York for two days; you gotta do it,” she explained.