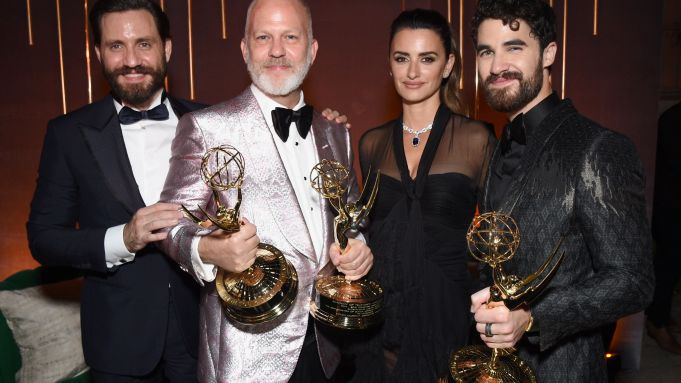 “Here we go,” laughed Keri Russell as she and partner Matthew Rhys stepped off the dark sidewalk and onto the step-and-repeat at FOX’s post-Emmy bash at Vibiana. Rhys was carrying his Emmy award for Outstanding Performance by a Lead Actor in a Drama Series, for their show “The Americans.” As the flashbulbs began to pop, the couple – who met on the set of the show and now have a child together – stuck close and smiled into each other’s eyes.

It was only a year ago that Russell and Rhys were new parents and could barely stay awake for the Governors Ball, but Rhys’ win clearly meant they were in for a longer night.

The network party is traditionally one of the most festive, also due to the success of Ryan Murphy’s “American Horror Story” and “American Crime Story” anthology series. This year, the latter’s installment of “The Assassination of Gianni Versace” took home the big prize for Best Limited Series or Television Movie and Darren Criss took home the award for Outstanding Performance by a Lead Actor in the category.

Inside the old cathedral’s cloistered garden, Murphy and Criss were flanked by costars Edgar Ramirez and Penelope Cruz, who played Gianni and Donatella Versace, respectively. “Darren, can we get a photo with you?” asked one couple. He obliged, for a umpteenth time that evening, grinning ear to ear.

Nearby, Judith Light chatted with Bob Odenkirk and Derek Hough and his date hovered around the tequila bar. When one finally made it through the crowd and inside the cathedral, they were treated to a DJ and dancers on the altar, and in the middle of the nave, a giant raw bar featuring oysters on ice blocks, sashimi, scallops and hearts of palm ceviche.

Off to one side where the chapels used to be there was a photo booth constructed entirely of gold blocks, where a professional camera man stood ready to capture guests’ Boomerangs inside. Needless to say, the line was a mile long, with even Emmy winners queuing up with their hardware.