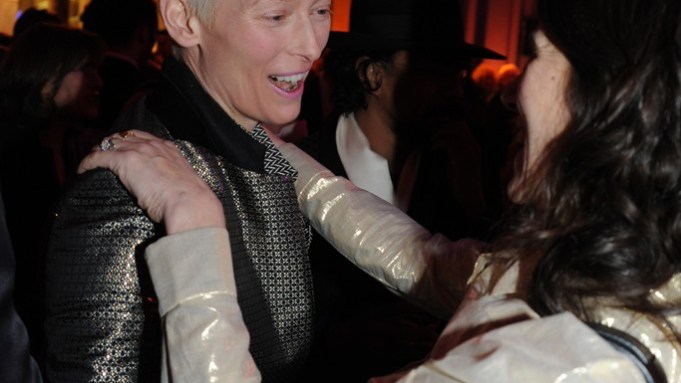 “I can’t decide whether I’m in awe of his talent or if I just really fancy him rotten,” said Elly Jackson, one half of pop duo La Roux, on Wednesday night at the opening party for “David Bowie Is,” a major retrospective of David Bowie’s work at the Victoria and Albert Museum in London. The exhibition, sponsored by Gucci, is already the museum’s fastest-selling show ever. It officially opens Saturday and runs through Aug. 11.

Jackson, who was dressed in a vintage Yves Saint Laurent jacket and white trousers, was channeling Bowie in his the Thin White Duke days. She also appears in the exhibition, with red hair and dressed in a Pierrot collar reminiscent of the costume Bowie wore in his “Ashes to Ashes” video.

Tracey Emin recounted how, in her youth, she would get drunk on sherry and sing Bowie’s songs at the top of her lungs. “Whenever I felt alone or weird or f—ed up, David Bowie was someone that I could relate to,” she told a crowd that included Erdem Moralioglu, Laura Carmichael, Edie Campbell, Douglas Booth, Patrick Grant, Rosario Dawson, Romola Garai and Pixie Geldof, who Instagrammed her way through the displays.

Barbara Hulanicki emerged from the exhibit feeling quite emotional. “There’s so much history,” she said, “All those songs. He used to come into the [Biba] shop, and the girls were so blasé about it, I’d have to drag it out of them.”

Inside the exhibition, Tilda Swinton, who appears with Bowie in his latest video for “The Stars (Are Out Tonight)”, was coming to terms with the high-tech audio guide that senses where one is in the exhibition and plays accordingly.

The exhibition traces Bowie’s career from his beginnings in Brixton, south London, to superstardom, delving into his creative process with a show of costumes, sketches, song lyrics, notes, storyboards, films and photographs.

“He would be working on a new album, writing songs, producing something, and still find time to put a storyboard for a video together,” said Victoria Broackes, who co-curated the show with Geoffrey Marsh. Outfits made by Natasha Korniloff for Bowie’s most famous persona, Ziggy Stardust, are dotted throughout the show, and there are one-legged and one-armed cat suits that don’t leave much to the imagination. Suits also wind their way through the show, especially the black Thierry Mugler number Bowie wore with kitten heels, the turquoise suit and lamé tie from “Life on Mars,” and the angular black styles and white shirts from the “Diamond Dogs” tour that inspired designers from Hedi Slimane at Saint Laurent to Frida Giannini.

There’s also a room that marks Bowie’s career as an actor: He’s been in more than 15 films, and appeared on Broadway in “The Elephant Man.” The final room is given over to Bowie’s influence on popular culture and features flashing images of Kate Moss in Vogue, Lady Gaga and a My Little Pony with an “Aladdin Sane” lightening bolt on its face — and a flame red mane.