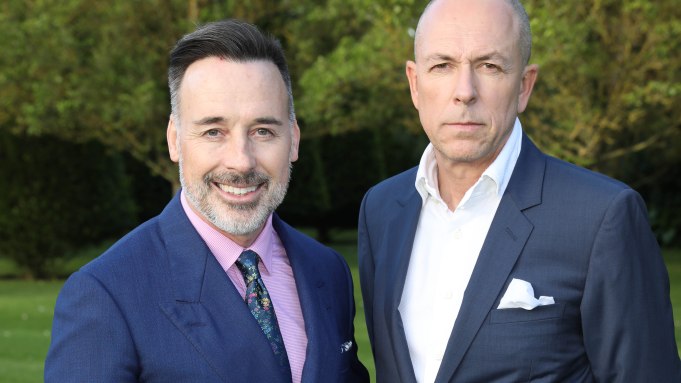 AT HOME: It’s been five years since David Furnish hosted a dinner at the Berkshire home he shares with husband Sir Elton John during the first London Fashion Week Men’s shows. On Saturday night he once again opened the gates to his bucolic grounds to celebrate the fifth anniversary of the shows and new sponsors Lqd Skin Care, an Australian men’s skin care brand.

Champagne and cocktails were served on the lawns as Furnish posed with LFW Men’s ambassadors Johannes Huebl, vlogger and columnist Jim Chapman, model and personal trainer Toby Huntington-Whiteley and actor Craig McGinlay, all of whom slightly outstripped Furnish in height, compelling the producer and director to spring into the air as the camera shutter clicked.

During dinner in Furnish’s cavernous art gallery space, amidst artworks by Damien Hirst, Gilbert & George and Mariah Robertson, McGinlay told how he’d had to bulk up for his role as Percival in Guy Ritchie’s “King Arthur: Legend of the Sword,” which opened in cinemas last month.

“I had to buy a totally new wardrobe,” he told WWD. “I put on a stone and a half (about 20 pounds) for that role. I have a masters in sports science, so I worked out the training program myself. I’d be in the gym for at least an hour-and-a-half twice a day. It was intense.”

“No way man, I need to do it on my own steam,” said model Oliver Cheshire, shaking his head at that level of intensive training. “I like to have a coffee and, when I’m ready, maybe do 40 minutes. No way I want some geezer shouting at me for an hour. I’ll do it my way.”

After dinner, GQ editor Dylan Jones thanked Furnish for his unwavering support of British men’s fashion before Furnish introduced the evening’s musical entertainment. “Elton would not forgive me if we did not bring you some music, particularly to a group of people who appreciate beautiful fashion and culture so much,” he said. “Elton has a radio show on Apple Music called ‘Elton John’s Rocket Hour’ and he gets all the new music every week and listens to everything. The artist we have to play for you tonight, Elton heard her and said, ‘This girl is incredible, she’s fantastic,’ and he loved her so much that we actually signed her to our music label, Rocket Music. Rosie [Lowe]’s doing something very special for us tonight: she’s working on her second album at the moment but she’s let the band go that she usually performs with and tonight is doing a solo interactive electronic performance.”