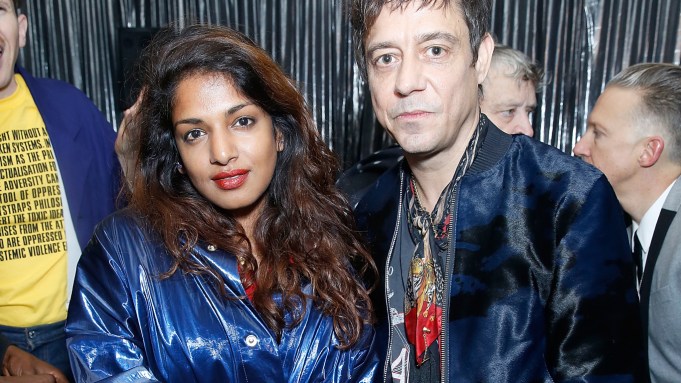 IN A DAZE: When non-fashion people imagine wild fashion parties, they are probably picturing something resembling the Dazed 25th anniversary party — a boisterous, raucous affair in a labyrinthine basement, with all sorts of weird outfits, kooky people, ultraloud music, bonkers hats and a queue that stretches around the block. It was the apotheosis of a big, nutty London fashion party. And a helluva lot of fun.

The door was manned by legendary Sven Marquardt, he who holds sway over who gets into Berlin’s infamous Berghain club, and perhaps the only bouncer in the world to have collaborated with Hugo Boss on a men’s wear collection, which explained the number of gentlemen attired in BDSM fetishwear, leather straps exposing hairy bottoms. One generously proportioned man wore a crystal gimp mask with a pair of fishnet stockings and what looked to be a satin apron. On the dance floor, limbs flailing to songs played by 2 Many DJs, was a skinny topless man in a pair of tight black jeans and a medieval executioner’s mask.

The party, co-hosted by Calvin Klein, had a stellar lineup of DJs, with The NYC Downlow crew performing to sets by names including Jamie XX, Craig Richards, Erol Alkan, No Vacancy Inn, Pandora’s Jukebox and Princess Julia.

Model Jade Parfitt had left her two children at home for a night out. “I’m coming to the end of my self-imposed maternity leave,” she said. “I have just launched a YouTube channel and am working on creating content for that,” she said. “The thing is, I am lucky to have great access to people, so I am doing a series of ‘Getting Ready With’ videos and ’10 Quick Style Questions.’ There are so many aspects to this business that are unexplored, like backstage hair and makeup artists, manicurists and video is a great platform to show it.”

Ensconced in a silver-walled area nursing a ginger beer and surrounded by Pamela Anderson, Jamie Hince, Lily Cole and Edie Campbell, was chief executive and cofounder of Dazed Media Jefferson Hack, who remembered his own 25th birthday fondly. “It was on Portobello, in a pub and I got a band called Mundy to play,” he recalled. “It was the first time I met Kate [Moss], she turned up. I remember getting very, very drunk and writing a ditty, the lyrics of which were, ‘I’m 25 and I’m still alive, yeah, yeah, yeah.’ It wasn’t great.”

“Tonight feels like a proper old-school party,” he continued. “Like all the best things about the past projected into the future, it feels like we’re at the coolest place on the planet right now.”