A host of New York socials turned out Monday for a cocktail reception for the diamond brand’s new coffee table book. 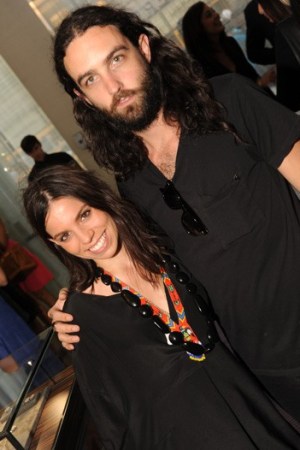 “This is a perfect marriage for us,” Devon Pike, chief executive officer of De Beers, said from the second floor of the company’s Fifth Avenue store on Monday night where there were certainly enough bedazzled baubles around to seal any deal. Christie’s and Vanity Fair co-hosted a launch party for the jewelry house’s new collaboration with Assouline, a coffee table book dubbed “De Beers Jewelry.” The hefty tome offers an illustrated glimpse into the history of diamonds, from their initial discovery to the birth of the De Beers brand and the “a diamond is forever” tagline.

Lydia Fenet, one of the event’s co-hosts (along with Punch Hutton and Alina Cho), greeted guests such as Lisa Anastos, Julia Loomis and Alexandra Lind Rose by the front door.

“Christie’s loves diamonds!” Fenet explained. “We do a lot with diamonds. We sell diamonds that aren’t very expensive and diamonds that are extremely expensive.… I personally like diamonds quite a lot. For example, these earrings I am a fan of…”

De Beers had lent the Christie’s executive a pair of elaborate chandelier earrings that reached almost to her clavicle.

“I may just take off,” Fenet joked, miming a run for the guarded exit. Adelina Wong Ettelson and Ann Dexter Jones were also on hand to survey the sparklers, as were Alexandra Lebenthal and Genevieve Jones. Ally Hilfiger and boyfriend Steve Hash made a brief tour of the space. The couple grabbed a pair of miniature grilled cheese sandwiches and kiddingly nudged each other over the cases of large-scale engagement rings.