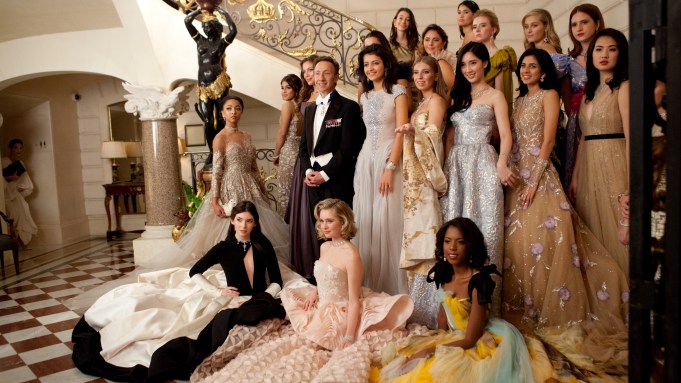 PARIS — “This is the first thing people are going to see when they Google my name.”

Anna Pei, a 21-year-old art history student at Columbia University, was sitting in the kitchen of the Parisian flat she shares with Julia McCaw, 18.  Sipping homemade ginger and turmeric tea, the girls, who are both taking a break in their studies to spend some time in Paris, chatted about all the things they have in common. Both spent their childhood in boarding school, love dogs, have just been through their first breakup, are struggling to figure out what to do with their future and were preparing to make their official introduction into society at Le Bal, the annual Parisian debutante ball.

Ten days separated them from the much-anticipated event, which took place on Saturday. The dresses had been fitted and the hairstyles planned — McCaw briefly considered shaving off her locks “à la Cara Delevingne.” Pei was concerned about being able to dance the opening waltz in her huge couture gown.

“My debutante ball pictures will be the first thing future employers see when they do background checks,” she cringed. “Alongside my Etsy page.”

In the end, all faux pas were avoided at the 24th edition of Le Bal, held at the Shangri-La hotel. The 19 debutantes perfectly maneuvered around the dinner tables on the arms of their cavaliers, while journalist Stéphane Bern announced their titles, accomplishments and future plans to the audience. Some of them gave regal waves and posed for pictures. Others focused on their trailing couture dresses, mindful not to step on hems or trip over tottering heels.

“I’m so proud of her,” said Forest Whitaker, who admitted to having practiced the dance “several hours” during the rehearsal the previous night. “I want everything to go well for her. It’s a really special day.”

Created in 1992, Le Bal is the crème de la crème of debutante balls. “The original idea for the first debutante balls was to bring together young people from the same social background so they could get married,” said Le Bal founder Ophélie Renouard, who picked up the concept of the debutante ball, which had disappeared in France just before the 1968 student riots, when she was in charge of events at the Hôtel de Crillon. But Renouard’s version of the event, modeled on the Berkeley Dress Show in London, is a mix between a fashion show — the participants exclusively wear haute couture creations — and a society event that isn’t strictly limited to young women of noble ascendance.

Every year, Renouard embarks on a worldwide search to sniff out the most promising young women of the current generation, ages 16 to 22. The event, supported by private sponsors, is organized to raise money for two charities supporting women. Participant families are asked to make donations to the Seleni Institute, a nonprofit organization that helps adult women and teenage mothers deal with mental health issues, and Enfants d’Asie (“Children of Asia”), a humanitarian association that promotes the education of women in Southeast Asia.

The U.S. has its own debutante balls, so why come all the way to Paris?

“From what my friends have said to me, American cotillions have an extremely patriarchal setting and seem a lot more antiquated in the routine of the evening,” said Pei, wearing a full-skirted Emanuel Ungaro gown. “In Paris, it’s all about the girls.”

“It’s kind of like a role reversal: the boys are on our arm,” quipped McCaw, who was sporting a Giambattista Valli yellow satin dress and was escorted by Harper Peck, grandson of Hollywood actor Gregory Peck. “It’s all about us, which I think is empowering.”

True Whitaker agreed. “It’s so great to be surrounded by all these beautiful young women empowering each other,” she added. “Le Bal is a platform to meet each other and network, and feel powerful together as women. It’s all about the ladies!”

When asked about their reason for taking part in such a traditional event, the vast majority of girls stressed the familial aspect. “My cousin did it before me, as well as a lot of my friends,” said Gabrielle de Pourtalès, decked out in an elegant Christian Dior bustier dress. “It was a dream to take part in it, and I’m living a real princess moment.”

Gordy James was initially supposed to make her debut in 2019, but an unexpected turn of events prompted her to be presented a little earlier.

“I am playing a recurring character in ‘Mixtape’, a new Netflix show for which we’ll start shooting in February,” said the budding actress, wearing Elie Saab. “Ophélie reasoned I should attend the ball this year, because otherwise I would have already made my debut into society via Netflix.”

The night wrapped up to the sound of the “La La Land” theme music, with all girls gracing the dance floor either with their father or their cavalier.

“It’s just so nice to see all these ladies from all different paths doing something that is really not in their comfort zone,” said Abigail Taugwalder, who was keeping a proud eye on Terrien, one of the youngest of the ball at 16, who was tentatively dancing with Bougon.

“They are really going for it, and in a way just making memories. In the future, maybe they’ll look back and be like, ‘Yeah, it wasn’t so bad.’”