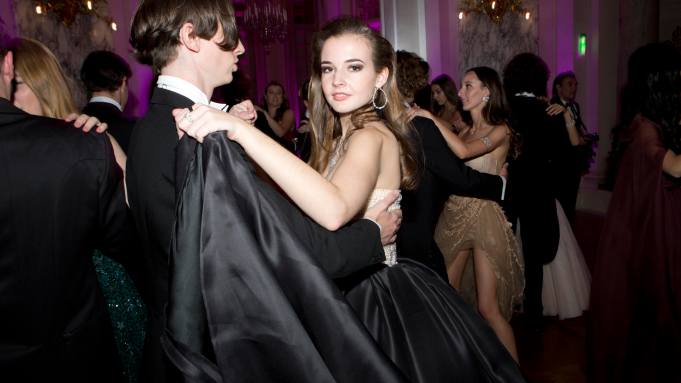 PARIS — Finding the perfect ballgown usually entails an emotional afternoon of endless fittings in a cushy boutique. But when it came to choosing a couture dress for Parisian debutante ball Le Bal, Kayla Rockefeller went down a different route.

“I actually found my dress on Instagram,” said the 20-year-old marketing student, who also happens to be one of the youngest members of the Rockefeller family, descending from famed business magnate and philanthropist John D. Rockefeller.

Cozied up in a corner of the Shangri-La hotel two days before it was taken over by Le Bal, she admitted that the minute she knew she was going to attend the prestigious Parisian event, she checked out all her favorite brands on social media. Mid-scroll, Rockefeller stopped on a picture of a burgundy bustier dress by American designer J. Mendel.

“I just fell in love with it, it was so gorgeous,” said the debutante, who went with her mother to try on the gown at the J. Mendel store on Madison Avenue in New York — as there are still limits to the possibilities offered by online shopping.

Social media is surprisingly key to the organization of Le Bal, the yearly event created by Ophélie Renouard in 1992, who picked up the concept of the debutante ball, which had disappeared in France just before the 1968 student riots, when she was in charge of events at the Hôtel de Crillon.

Pictures of the 20 debutantes for the ball’s 2019 edition, ages 16 to 20 and hailing from a dozen different countries, were regularly posted on Le Bal’s Instagram account during the weeks leading up to the event. They showed the girls posing during couture fittings or visiting the headquarters of the Seleni Institute, one of the two charities supported by the ball.

“That’s actually how a lot of girls were able to meet: Le Bal posted and tagged the debutantes on social media, so we were able to connect with each other that way and plan to grab dinner together,” said Rockefeller. “It’s quite in keeping with this day and age — you can find someone on social media so quickly. We really took advantage of that.”

Instagram presence is probably the only modern detail about Le Bal, which remains endearingly quaint 25 years after its first edition. On Nov. 30, counts and countesses, dukes and duchesses, royal highnesses and film stars alike gathered under the gilded ceilings of the Shangri-La to celebrate the belles of the 2019 ball. There were saris and tartan trousers; rumor has it a gentleman checked in an actual cape at the cloakroom. After dinner, the debs were expected to dance the waltz, a fact that added considerable stress to the evening.

“I spent last night looking at waltz videos in my hotel room,” confessed Araminta Mellon. At least the 17-year-old was already used to walking in heels — being the daughter of Tamara Mellon, the cofounder of Jimmy Choo who’s now head of her namesake brand, she confessed to having had plenty of practice.

Belmondo wasn’t the only actor in the house that evening. Jet Li flew in from China to present his daughter Jane, as did Bollywood star Sanjay Kapoor, who danced one of the opening waltzes with his daughter Shanaya. The 2019 edition of Le Bal featured twin debutantes: Victoria and Cristina Iglesias, the 18-year-old daughters of famed Spanish singer Julio Iglesias.

It was also the first time Argentina was represented within the selection, in the person of Alexia de Poligny, daughter of the Count and Countess of Poligny. Rounding up the debutantes this year were Victoria Liao from China; Rocio Zobel from the Philippines; Countess Tatiana Mouravieff-Apostol from Russia; Asuka Ikenobo from Japan; Yuet Sham from the special administrative region of Hong Kong; Athina Manou from Greece; H.R.H. Princess Maria Carolina de Bourbon des Deux Siciles from Italy, and Phoebe Fraser, granddaughter of writer Lady Antonia Fraser, from the United Kingdom.

The debutantes were announced to the packed rooms of the Shangri-La by French journalist Stéphane Bern, who stated their titles, accomplishments and future plans to the audience. Each was accompanied by a cavalier — a brother, cousin or childhood friend; was decked out in diamond creations by Indian jeweler Harakh, and wore a couture gown by names such as Jean Paul Gaultier, Giambattista Valli, Dior or Chanel.

Despite being more open in its selection process — princesses and countesses mingle with daughters of property developers and telecom magnates — there is still a whiff of exclusivity to Le Bal: The participants are asked to wear couture or haute couture creations and can only attend on invitation; it’s impossible to buy your way into Le Bal.

In addition to it being a society event — a number of business cards were exchanged that evening — Le Bal is above all a moving family moment. The Iglesias sisters chose to share one cavalier, their cousin Niccolo; Indian and Japanese grandmothers were radiant in traditional dresses, and the minute the waltz ended, Mellon raced over to join her mother.

“I first heard of Le Bal via my cousins on my dad’s side who had all done it,” said the Oscar de La Renta-clad debutante, who lost her father Matthew Mellon in 2018. “My uncle wanted me to carry on the tradition. It was fun because I got to see all the old photos and their dresses.”

Others have a long-lasting history with Le Bal. “My cousins did it a couple of years ago, and apparently my godfather was a cavalier in the Eighties,” laughed Louise d’Orléans, who paired her red Giambattista Valli gown with a fleur-de-lys tiara created by Harakh in homage to her noble ascendance. “It’s clearly part of our roots.”

The 20-year-old debutante had come down to Paris from Lille, France, where she is currently studying agronomy and engineering. It made for a real change of setting.

“It’s a bit weird to be thrown into this world,” she confessed. “I’m not used to people asking me questions and taking my picture. I didn’t particularly dream of this moment.”

D’Orléans, who is planning to go to the next climate march in December, doesn’t yet know what her ideal job will be, but there is one thing she is sure about.

“I know it’s up to our generation to change things,” she said. “At school, they tell us that we are the engineers of tomorrow and that we’ll be the ones to bring change. There is a bit of pressure, for sure. But I know my future job will be linked to saving the planet.”