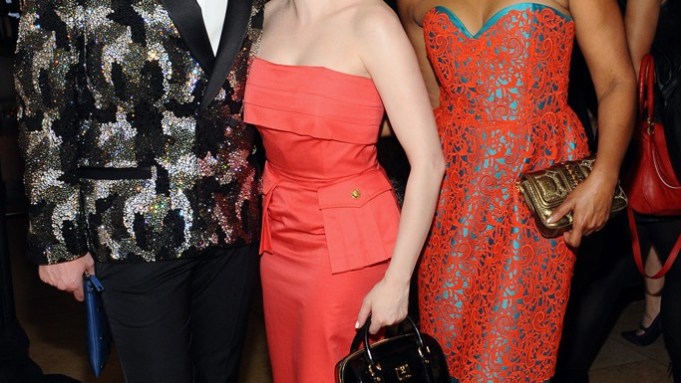 REALITY CHECK: On Thursday night Cameron Silver and Christos Garkinos, co-owners of Los Angeles vintage shop Decades, celebrated the March 6 premiere of their new Bravo reality series “The Dukes of Melrose.” Presented by Harper’s Bazaar, the fete at The Terrace at Sunset Tower was bumping with vintage fans like Rachel Griffiths, Rose McGowan, Abigail Spencer, Leslie Bibb and Perrey Reeves. “It feels like a bar mitzvah,” said Garkinos of the loud music and the multicolored party dresses, like Morena Baccarin’s ombré Madame Grès. “This is Norman Norell,” said Isabelle Fuhrman of her bright yellow shift dress, from an era that predated her own mother. “I bought this vintage Prada coat at Decades Too for $200,” said Griffiths. For his part, Silver, in a crystal-encrusted Versace Atelier blazer, said, “It was a bitch for them to tailor, but they did it.” When one guest remarked that he could give Versace muse Angelina Jolie a run for her money, he replied, “Well, these pants are so tight that they could split, and we may get some side slit leg action.”