Dee Ocleppo and Tommy Hilfiger have been taking London by storm. On Tuesday, they hosted another dinner at Robin Birley's Loulou's.

By Julia Neel and Stephanie Hirschmiller on June 17, 2015
View Slideshow 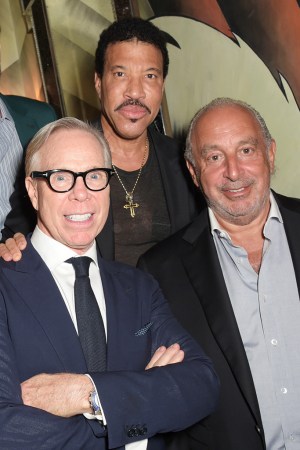 Dee Ocleppo and Tommy Hilfiger have been taking London by storm, hosting two dinner parties in three days, one at newly reopened The Ivy on Sunday and another on Tuesday at Loulou’s, the private Mayfair club owned by Robin Birley.

Tuesday’s dinner, with guests including Lionel Richie, Sir Philip Green, Lady Victoria Hervey, Princess Beatrice, James Blunt, Melissa Odabash, Juliet Angus, and Ricky Hilfiger marked the in-store launch of Ocleppo’s pre-fall collection, which is being delivered to stores now. A percentage of sales will go to support Walkabout Foundation, a nonprofit organization that donates wheelchairs to people in need around the world.

“It’s great when girls can all come together and help one another, I mean why not? That’s what we should do. That’s what I do with my friends and what I hope my friends do for me,” Ocleppo said.

Across town in Covent Garden, Rodial president and founder Maria Hatzistefanis hosted a dinner at Balthazar to celebrate the Rodial Art & Design Challenge 2015, in association with Central Saint Martins.

Some 25 B.A. product design students were tasked with creating an innovative makeup case to reflect the Rodial brand’s DNA. The winner, chosen by Hatzistefanis and other panelists, was Aaron Chung whose design will be sold at the Rodial concession in Harvey Nichols London this fall.

“Galliano, McQueen and Stella McCartney all graduated from Central Saint Martins, so I knew we’d find some great raw talent,” Hatzistefanis said. Having given the students the brief, she mentored them over a term, from prototype to product.

“It was important what they created was not only beautiful and useful, but also that it was commercially viable,” she said. The process was also filmed and will launch as an online series this fall.

The win came as something of a shock to Chung as he was the only male out of the 25 candidates. “It was my first time designing a woman’s product and I didn’t know anything about the makeup industry before so I had to do a lot of research.”

What did he learn? “That women need a lot of different makeup brushes,” he said. The case, which has yet to be revealed in public, allows the user to customize its size when they’re on the move.