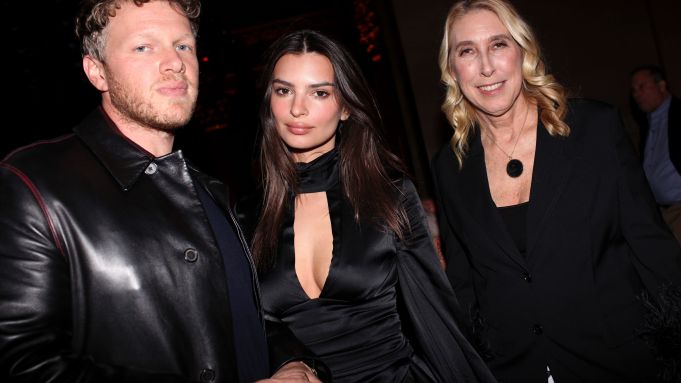 Rem Koolhaas has thoughts and theories about Manhattan. They are most prominently documented in his 1978 book “Delirious New York,” in which he claims Manhattan as “the 20th century’s Rosetta Stone.”

On Wednesday night, the Dutch architect found himself living his theory on the culture of congestion. Koolhaas was this year’s honoree at the New Museum’s spring gala, and before dinner he could be spotted towering above the dense cocktail crowd, penned off in just a side sliver of Cipriani Wall Street. You could barely wade through the VIP masses, but if you tried you were sure to run into the likes of Kaws — just days after his “The Simpsons”-inspired “The Kaws Album” painting sold for $14.7 million during auction in Hong Kong, a new record for the low-key pop artist — or maybe Sienna Miller and gallerist beau Lucas Zwirner, or David Byrne, or Sheree Hovsepian and Rashid Johnson — whose first feature film will be out on HBO this Saturday —  or Cindy Sherman, or Nari Ward, whose survey of work, “We the People,” is currently on view at the museum.

“The museum does such great shows,” said Byrne. “They kind of color outside the lines.”

Spotlit on the wall before dinner was an equestrian work by Raymond Pettibon, which was up for live auction later in the night. The artist, who is represented by David Zwirner gallery, made the work especially for the event. “That’s the most exciting thing — Raymond is so generous and he loves the New Museum,” said Lucas Zwirner, energized even before the work sold for over its estimated value of around $120,000. “I think [the museum’s] location is tapping into this incredible, young, energized audience, and that’s an amazing thing,” added the 27-year-old. “There’s really no other place doing that.”

Up on the mezzanine, Sebastian Bear-McClard and wife Emily Ratajkowski — who have found themselves the subject of controversy for utilizing New York’s artist-targeted Loft Law to skirt sky-high rent — chatted with New Museum president Lisa Phillips. Hey, if they’re going to support an art institution or a landlord, better the former, right?

The dress code for the evening was listed as “delirious,” although that proved a puzzling prompt for much of the crowd, which either ignored the theme or hit it by virtue of being their creative selves — as was the case for John Waters.

“Well, I didn’t know that, I forgot that,” said Waters, who staged his first retrospective at the pre-Bowery location of the New Museum and has been a longtime gala supporter. “Everything I wear feels delirious anyway, so I wore Walter Van Beirendonck. I think he’s the best delirious designer.”

During dinner, Koolhaas nodded to the museum’s support of art and ideas. Not only that, but the New Museum has shown its support of Koolhaas in an even larger gesture; his OMA firm has been selected to design the museum’s expansion. It will mark his first public building in Manhattan. As Koolhaas wrote himself in his manifesto, “Manhattan is the city of the perpetual flight forward.”

“A more risk-adverse museum would have maybe waited to honor me until the project was delivered, after the completion of the project,” said Koolhaas. “But this may be exactly that risk-taking which we’re celebrating here.”