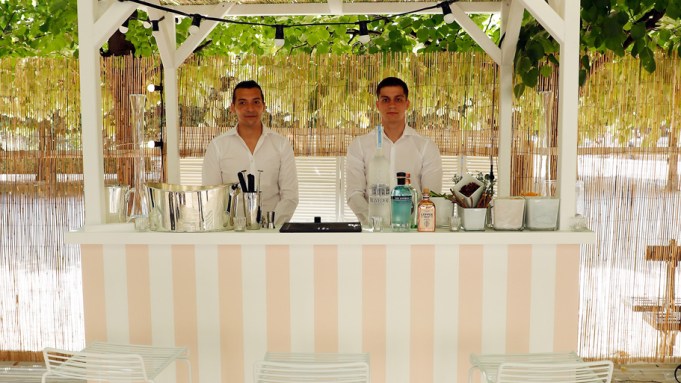 SUMMERTIME: The leisurely ambience of the Delvaux cocktail Sunday evening was a relaxing break before couture week truly kicked in.

The Belgian leather goods-maker set up its own beach bar for the “Delvaux sur Mer” party outside its store in the gardens of Palais Royal, complete with pétanque ground in the sand, where guests sipped on flowing glasses of iced rosé wine and pastis to the tune of classic pop tunes from Elton John and The Beatles to Claude François.

The languid atmosphere under the cool of the park’s trees attracted guests including Isabelle Huppert, Anna Cleveland and Olivia Palermo. Virginie Ledoyen and Ana Girardot chatted away happily with Delvaux ceo and chairman Jean-Marc Loubier on one of the sofas that decked the wooden terrace for the evening.

Girardot has few plans for relaxing over the summer.

“I’ll be making a film by Quentin Reynaud with Alex Lutz in the fall, called “Cinquième Set” [“Set Five,” in English]. It’s about tennis,” the actress said. “I have two months left to work out so I have an athlete’s body. With all the aperitifs, the rosé over the summer, I don’t have a choice.”

She was nevertheless dreaming of the sea. “Look,” she said, pulling out her smartphone to show a photo of waves breaking on the sand. “I have this photo as my wallpaper, that’s my inspiration.”

Noémie Merlant is planning a working vacation, meanwhile. “I’m finishing up a short about a young Roma girl who lives in a shanty town in Paris, and how she tries to get by,” said the rising actress, who also has several movies out later in the year. “I started meeting Roma families through my charity work, and I met the girl and her family and we really hit it off so we decided to make a film. We’re going to see her family in Romania. It’ll be half work, half vacation.”

Merlant stepped inside the boutique to check out Delvaux’s new mini “Pin” bag, a tote with a giant D-shaped pocket originally launched in 1972 and already available in larger sizes.

For everyday use, the actress prefers a larger purse. “It has to be big enough, because I carry around a lot of stuff,” she said.

“I often carry a book, a hair accessory, some makeup, sun cream, notebooks, because I’m always writing down ideas,” she listed. “That takes up a lot of space, it’s also a bit like a first aid kit, too.”

Caroline Vreeland likes a cross-body design. “I like to be able to attach a strap for in the day when you want to walk around, and then at night take it off. Day to night is really important,” said the influencer, whose new album is releasing shortly.

“It’s Patsy Cline meets Nancy Sinatra,” she revealed. “I was going to call it “Please Feel,” because that’s one of my mantras, but as it turns out it’s all about sex and wine, so I’m going to call it ‘Notes on Sex and Wine.’ That’s my truth, in vino veritas.”

On her towering peep-toe mules, Betony Vernon said it was important that she could slip a pair of ballet flats inside her bag for running around Paris. “This one’s perfect,” she said of her Delvaux Brillant purse.

The jewelry designer has a major new project up her sleeve, she said. “It’s much bigger than me,” she said. “It would bring me back to Italy part time.”

For Virginie Ledoyen, a purse is more about the feel than the look. “I have to really like it, and the touch is really important, it’s something very tactile, the way you hold it, and it has to be practical,” she said.

Ledoyen will appear later in the year in “Notre Dame,” a comedy about architects working on the square outside the famous cathedral, which tragically went up in flames earlier this year.

“It was filmed just before the fire, so it was a real shock,” she said.