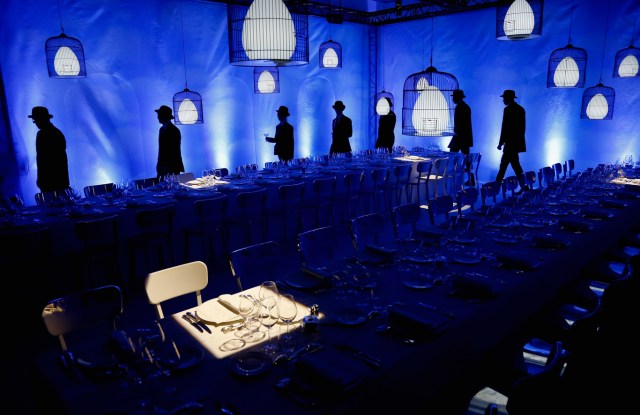 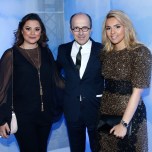 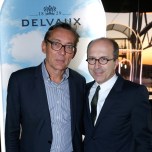 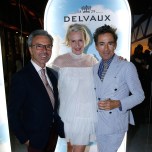 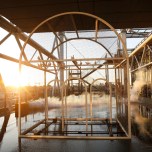 NIGHT AT THE MUSEUM: “Belgi-tude” is what Delvaux chairman Jean Marc Loubier refers to as the reason for joining forces with the Magritte Foundation to sponsor the current exhibit “Magritte: La Trahison des images” on display at the Centre Pompidou. Loubier and Delvaux artistic director Christina Zeller hosted an intimate dinner party atop the museum Wednesday night that culminated with a private tour of the Delvaux-sponsored exhibit, a first for the Belgian luxury house. “Both Magritte and Delvaux come from the kingdom of Belgium,” noted Zeller. “Any time we can connect Delvaux to something Belgian we reinforce the idea of its heritage.”

The brand had already collaborated with the Magritte Foundation on a capsule collection for holiday 2015 as well as one of the brand’s successful “Ceci n’est pas un Delvaux” bag. The “Brillant” version called Humor was launched in 2008 and part of the 50th anniversary of the bag style.

As Zeller put it, the connection is a natural one. “Both the brands of Magritte and Delvaux appeal to spirited, independent, those-in-the-know types or as we say in Belgium, the auto-dérision” — in other words, the ability to laugh at oneself.

Guests arrived at the private fifth floor terrace to a dramatically lit giant white birdcage filled with a dozen white doves with a smoke machine. The crowd was then entered a “cloud-fllled” room complete with eggs-in-a-birdcage lamps, both recalling the artist’s work. The food also recalled his work, the first course was an egg-truffle dish served under a bread “lid” on grass to create a nest, dessert a pomme-vert soufflé made to resemble the real thing and eye-ball “mise en garde” cookies to finish.

After dinner guest such as Princess Sheikha Aisha Al Thani of Qatar, patissier Pierre Hermé, jeweler Marie Hélène de Taillac, curator Pamela Golbin, Maïa and Benjamin Paulin, widow and son of the late French furniture designer Pierre Paulin and dancer Jérémie Bélingard of the Paris Opera who had just finished acting in the film “Paulina” with Juliette Binoche. Guests were given a private tour of the exhibit by the curator Didier Ottinger, along with Centre Pompidou’s Bernard Blistène and Fondation Magritte’s Charly Herscovici.

Artist Xavier Veilhan, who will represent France in the next Biennale, was also in attendance. He noted, of Magritte’s popularity, “It makes me happy any time and you can help art reach a big audience.” While the artist mostly delves into statues and sculptures, he said if he were to design a bag with Delvaux it would “probably be a big trunk or backpack” so he could travel somewhere with it.

Delvaux will continue to sell the Magritte-themed bags at the museum shop and boutiques.