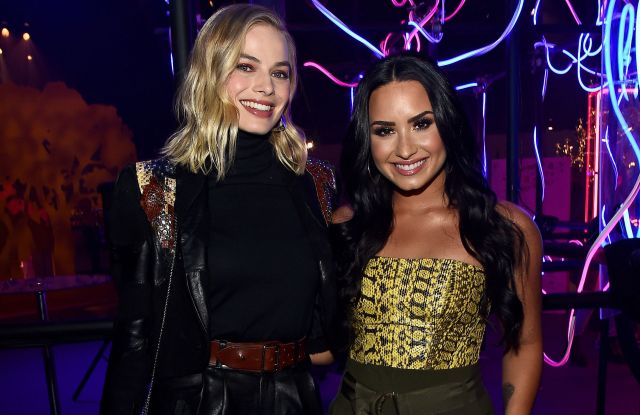 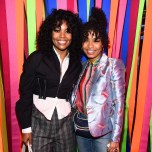 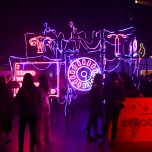 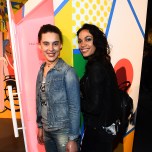 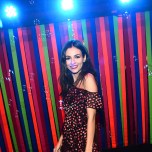 Margot Robbie, Demi Lovato and Janelle Monáe were among the collaborators who attended an opening night party for Refinery29’s West Coast debut of “29Rooms,” a sold-out interactive art exhibit on display through Dec. 17 at Row DTLA.

“I’m doing a room called ‘What’s Your Frequency?’” Monáe said. “It’s about this ongoing conversation around mass surveillance, the weaponization of technology and cultural uniformity. My space was created so that we can come together and talk about the complexities of our humanity.”

Monáe’s installation featured black-and-white mannequins alongside mirrors and security cameras. “Right now, we’re at such a nascent stage psychologically versus the rapid exponential rate at which technology is advancing. It’s like we’re babies with chainsaws,” she said, describing the concept behind her piece. “We have some questions to ask ourselves. How are we all going to deal with what that means, what that means to be dealing with technology that is moving at an exponential rate when we’re moving linear-ly?”

Teen singers Chloe and Halle Bailey were also on hand for their collaboration. “Benjamin Shine created this beautiful piece for us,” Chloe said of their space which featured an audio visual activation inspired by the idea of harmony and uniting energy. “It represents sisterhood and that bond and how two minds are better together.” Their installation was previously on display during Refinery29’s New York Fashion Week event in September, but Chloe said they were excited to “see it here in L.A. where we live.”

While most collaborators wandered around the event until late in the evening, Robbie was on a tight schedule. “How long do we have here?” she asked a handler. Robbie proceeded to take a few photos in front of the “I, Tonya” inspired installation before jetting off to a Q&A for the film.

“29Rooms is something I look forward to every year,” said Victoria Justice. “It makes my soul very happy. Not only is it visually pleasing and interactive, but I love that you can learn so much from being here.”

“It feels like an Instagram orgasm explosion,” laughed Lister-Jones as she looked around the colorful “Turn It Into Art”-themed scene. “In addition to how visually stimulating this is, the way Refinery29 is using their brand to lend a voice to injustices that we’re facing in our world, is really inspiring.”

Hahn attended in support of Planned Parenthood’s neon-lit activation. “Art is an empathy machine,” she said. “It’s only through hearing someone else’s story that you can really effect change at a cellular level,” Hahn added. “The fact that there’s even an inkling of [our reproductive rights] being taken away from us is so maddening to me. With all this fun, and it’s obviously a beautiful, exciting evening, but it is serious business the threat of that being taken away.”