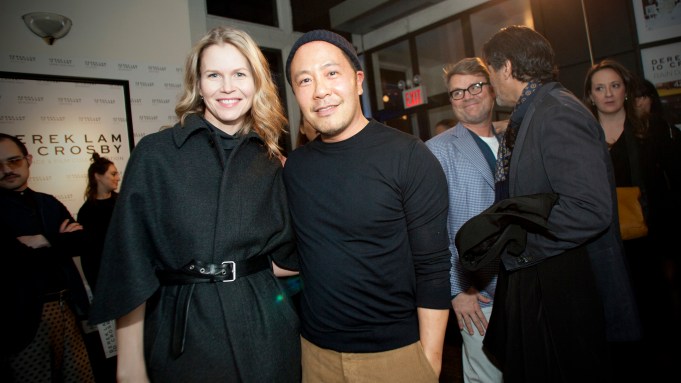 Derek Lam transformed New York City indie-staple The Angelika Film Center into a chic venue for his cinematic debut on Tuesday night. The designer was joined by Henry Joost and Ariel Schulman, cofounders of Supermarche/Moxie Pictures Production and creative directors on the project, to celebrate the premiere of their 10 Crosby fragrance film collection. Curating a selective group of New York-based directors, writers, actors, dancers and musicians, the team created 10, three- to five-minute stories in line with each scent.

“It’s really about breaking rules about how people experience fragrance and how they experience the storytelling,” said Lam, clad in white sneakers, camel pants, a black sweater and matching beanie. “By doing these films without advertising, no product placement, no spritzing of the fragrances — it’s purely about inspiration. To collaborate with such talented filmmakers and actors and choreographers, and musicians is a way to broaden the stroke as to what fragrance can mean.”

The films were launched digitally Wednesday on 10crosbyfilms.dereklam.com, where they will be available for download.

Sporting a blush pink jumper, actress Jennifer Kim gushed, “I was in a short with a bunch of my friends so I was super lucky I got to hang with them,” She appears in the short that corresponds with the Blackout scent and admitted that she may be playing favorites. “Actually, I’ve only smelled mine. Needless to say, I like it a lot.”

An hour or so into the scene, guests made their way down to the screening theater where they were greeted with staff proffering popcorn in black and white striped paper containers and Champagne. The rowdy crowd was quieted down by the men of the evening — Lam, Joost and Schulman.

The directors thanked everyone involved in the production process and Crosby Street for being the inspiration for it all, although there were some bumps in the road while filming.

“Well, that’s shooting in New York, that’s independent cinema and that’s exactly the project we wanted to make. Thank you to New York City for being the inspiration to all of these. Thank you to Crosby Street and SoHo,” Schulman said.

The films featured diverse storylines taking place on Crosby Street, from a quirky first date to a revelation of self-love, with each intertwined with its actors, as leads and secondary characters throughout.

Following the screening, guests were treated to a candy stand serving up gummy bears and cotton candy and were surprised with a performance by Sandflower, Ava Raiin and Sye Claing, singing a song featured in the scent film, “Hi-Fi.”

When asked which film was his personal favorite, Lam kept mum. “There is [a favorite] but I can’t tell you. I don’t want to cloud your opinion but there are about three or four that are so touching that I remember the first time I saw the rough cuts, I was almost in tears. To say that I was a part of this is very touching to me.”