Designers Come Out at 10 Downing Street 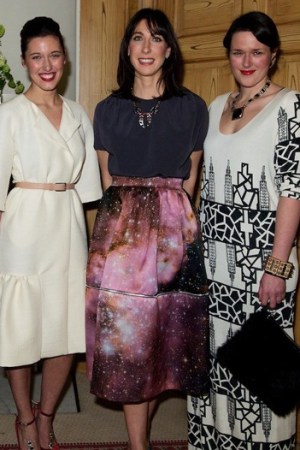 “So, who’s making Kate’s dress – Middleton and Moss?” asked Tillman, chairman of the British Fashion Council, during a short speech midway through the evening. The room, for a moment, went silent as a tomb.

Later that evening, Dagworthy chatted about her latest honor: An Officer of the Order of the British Empire medal from Queen Elizabeth II. “Prince Charles gave me the award and complimented my black Perspex hat,” said Dagworthy, who had worn a design from the young British talent Zara Gorman.

Hilary Alexander is also celebrating a milestone, of sorts. “I’ve turned 65, which is why I’m semi-retiring,” said the doyenne of British fashion journalism and fashion director of the Daily Telegraph.

For another British fashion great, the road to Downing Street was a well-worn one. “I’ve already been here with Margaret Thatcher and Tony Blair,” said Westwood, who attended with her husband Andreas Kronthaler. “Thatcher was repulsive: When I went to shake her hand, she pulled away. But I have to say I really like Samantha Cameron.”

While Cameron may have been the hostess, one of Downing Street’s newest and most written-about inhabitants — Larry the cat — did not put in an appearance.

According to Downing Street sources, however, Larry — a four-year-old tabby who’s been brought in to scare the rats — is already a fashion victim: The Cameron children are dressing him in Mulberry pet clothing.