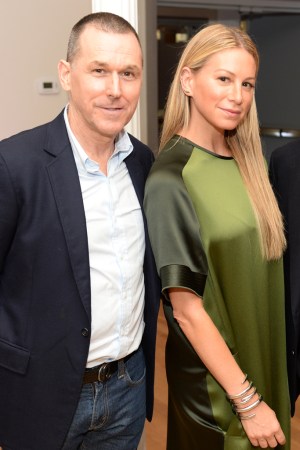 Flash-flood warnings and Veuve Clicquot-induced hangovers didn’t stop fashion folks from making their way down to Manhattan’s West Village on Sunday evening for the third annual Fashion Centered dinner held in support of The Center, New York’s LGBT community center. The crowd was much abuzz with pre-CFDA anticipation, more than ready for the big ceremony the following night. “It’s already such an honor to be nominated, so the pressure is sort of off,” Joseph Altuzarra, who spent the weekend shooting his pre-collection, said humbly of his award show stress.

Paul Andrew, who is up for the Swarovski Award for Accessory Design, admitted to some nerves. “I’m super excited — daunted simultaneously,” he said. He also revealed he is partial to a good luck omen: “When I’m coming to work in the morning and something big is going to happen that day, I love the idea that I might find a coin heads up on the street. So maybe I’ll be looking for that Monday morning,” he laughed.

Prabal Gurung, who is bringing “two incredible dates” to the awards (he was mum about who), first came to The Center through the invitation of Barney New York’s Mark Lee, cohost of the evening. “With the incredible work they’re doing, when you’re asked to lend your name and support, you just do,” he noted. Likewise, Narciso Rodriguez has become well acquainted with the community center’s effect. “I’ve been to a few of The Center’s events now, and they’ve had such an amazing impact on so many lives. I’m always happy to come and support,” he said.

Guests sat down to a family-style dinner of grilled vegetables and roast chicken, and listened to accounts of the many lives The Center has worked to improve. “We started this dinner three years ago, and we didn’t really have any relationship with the fashion community of New York City, and it seemed like such a natural partnership,” said Glennda Testone, executive director of The Center. “Tonight we are trying to raise money to launch the nation’s first LGBT youth substance abuse program.” The first dinner, two years ago, was focused on awareness; last year, they brought fundraising into the mix, raising roughly $200,000. Sunday night’s event raised close to $300,000.

“Young LGBT people can find a home in The Center, also in the fashion community, which encourages people to express themselves and [to] not do the conventional thing,” Testone said at the evening’s close, between thanking the many designers in the room who do unconventionality so well.