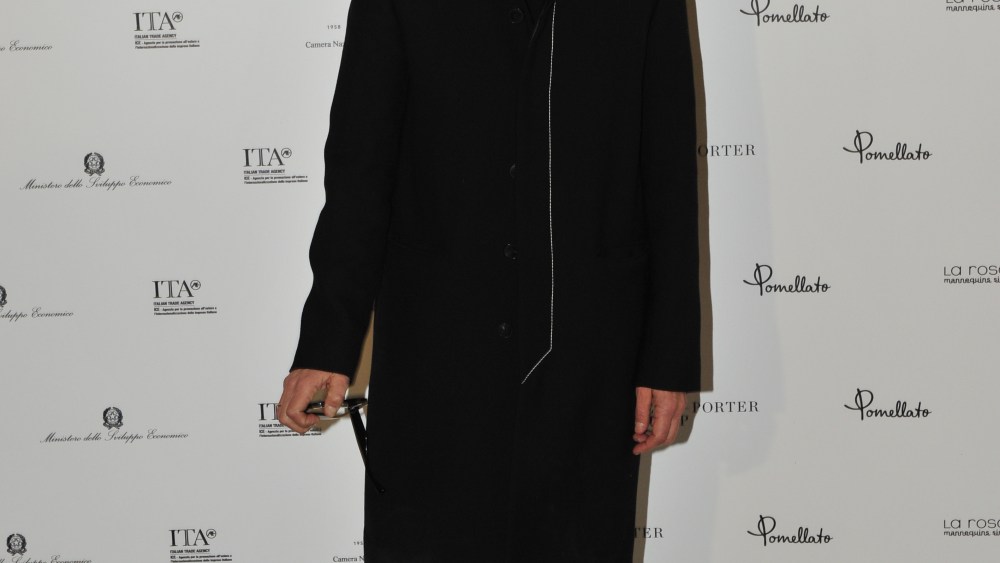 “The Seventies, Eighties and Nineties were a fantastic period — music, fashion and design left a fundamental mark in those years,” said Diesel founder Renzo Rosso on Wednesday at the unveiling of the exhibition “Italiana. Italy Through the Lens of Fashion 1971-2001” at Milan’s Royal Palace, followed by a lunch at the Sala delle Cariatidi, officially kicking off Milan Fashion Week. “I made my first pair of jeans in 1971,” Rosso mused.

Asked to comment on how he conceived the deconstructed pantsuit in the first salon of the exhibit, which explores the theme of gender, Giorgio Armani said it was a reaction to the Sixties, which he never liked. “I felt things were forced and fashion was too extravagant. I asked myself why should we disguise women, they have busy social lives, they work, and they need to dress for that.”

Donatella Versace marveled that “nobody ever thought of an exhibition on that particular moment in time, one of great changes and transitions.” While the Versace company can rely on an extensive and comprehensive archive, she said she would never think of setting up an exhibition. “I have a problem with the past, the tribute [in September to her late brother Gianni] already cost me a lot,” she explained.

Pierpaolo Piccioli’s first approach to fashion was through the images in Vogue Italia. “Franca [Sozzani] and those photos were a point of reference for me,” he said of the magazine’s late editor. He praised the exhibit for highlighting “Italy’s industrial reality, the family businesses, the craftsmanship and how the infrastructures were created, building an articulated and complex system, structured and increasingly stronger.”

Jean Paul Gaultier also remembered how he would flip through Vogue Italia and see the designs by couturiers Renato Balestra, Valentino, Pino Lancetti and Emilio Pucci. Speaking of the evolution of Italian fashion, he said, “Italians would make beautiful things to sell — the French think commercial is vulgar. There were real collaborations between business, beauty and creativity. I would work with the fabric producers in Como and they were open to any request, and offer exclusive fabrics.” Spying a curtain of black beads on the back of a Romeo Gigli jacket, he couldn’t resist testing the weight of the strands to see if they were jet. “Plastic,” he declared.

MSGM founder and designer Massimo Giorgetti’s first memories of fashion date back to when he was three years old. “I was at a family dinner and my uncle’s fiancée wore a red coat with a fox collar. It was beautiful, I was enchanted, and I kept looking at it and wanted to touch it all throughout the dinner,” he said with a laugh.

Rosita Missoni, flanked by her daughter Angela and her son Luca, as well as her granddaughter Margherita, remembered how the period examined by the exhibit marked “the moment of the affirmation of Italian fashion in the world.”

The exhibition spans from the first runway show staged in Milan by Walter Albini and Anna Molinari fondly remembered the designer as her master. “His stature was incredible, he taught me everything and he taught me beauty and my first show was dedicated to him.”

Weaving through the almost 130 looks on display, Giuseppe Zanotti said he “had goose bumps.” Shaking his head, he said, “These collections lasted six months, not one — like today. This is the culture of fashion.”

Federico Marchetti, chief executive officer of the Yoox Net-a-porter Group, which is the main partner of the exhibit, said he first started approaching fashion as a teenager. “I was 13 or 14, I wanted to differentiate myself, and I couldn’t stand the idea of a uniform. So I would go to the vintage store Angelo near Ravenna and buy a hooded jacket that nobody else would have.”