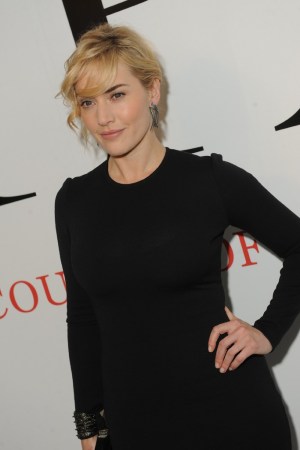 “IMPACT: 50 Years of the CFDA” sizes up fashion’s passage of time, so it was fitting that many designers at Thursday’s opening night party were very much aware of the countdown until showtime.

Before whirling through the exhibition at the Museum at F.I.T., Alexander Wang said, “I felt a little guilty about coming tonight, but I am so honored to be part of the show. I had to see it. I want to see everything old and new.”

Apparently, so did Kate Winslet, who walked slowly through the show on the arm of St. John Knits creative director George Sharp after dutifully posing for pictures upstairs. The Academy Award-winning actress declined to answer questions, but he chose to speak for her. “She liked some of the earlier pieces — the Oleg Cassini.”

Dennis Basso had no regrets about taking a break. “I couldn’t look at another dress, another hemline or any more beading — but I will tomorrow morning at eight o’clock,” he said. “Actually, if you have a good team, it makes the difference.”

Nanette Lepore and her husband Bob Savage, an FIT Board member, had to duck out of an event for Saks Fifth Avenue associates at her showroom to be there. Like many in the crowd, they lingered upstairs near the bar instead of the gallery below. “It’s been a month of panic,” Lepore said with a Champagne flute in hand.

Eyeing a Giorgio di Sant’Angelo ensemble, Behnaz Sarafpour said the designer died shortly after she came to New York in 1989. “I went to the showroom and bought every sample I could afford to buy. I was a big American-designer groupie before I was a designer,” she said. “I see a Geoffrey Beene dress over there that I have a sample of. I was going to wear it tonight, but it was a little small. I am now a size 4, but in college I could wear a zero. So I guess that sample will be more of a souvenir.”

Anna Sui, who promised Steven Kolb she would do a drive-by, was eager to see the designs of Donald Brooks and his contemporaries. “I wish I had designed in the Sixties. That was probably when all my feelings about fashion and my career were formed. I was in school then — grade school,” she said.

Asked for his favorite piece in the show, Gilles Mendel mused, “Besides mine?” before singling out looks by Tom Ford and Ralph Rucci. However immediate and accessible fashion is today, Mendel said, “That history doesn’t go away. You need a certain amount of history to be grounded today and to go towards the future.”